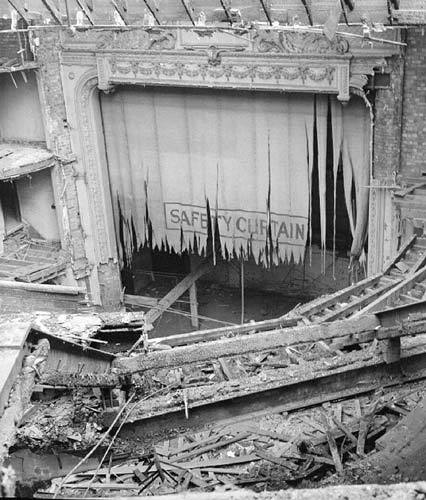 Located on the intersection of Bond Gate, Bond Street and Leicester Road. The Prince of Wales Theatre was opened on 17th December 1900. The front of the theatre was dominated by two domed cupolas on each side of the three storey building. In the centre was a terra cotta statue of Euterpes (the Goddess of Poetry). Inside the auditorium, seating was provided in orchestra stalls, dress circle and gallery levels, with two boxes on each side of the 35 feet wide proscenium. The stage was 25 feet deep and there were five dressing rooms.

In March 1926 it was taken over by C.D. Cinemas Ltd. and the building underwent reconstruction for cinema use to the plans of architectural firm Satchwell & Roberts. In July 1929, ‘talkie’ equipment was installed in the Hippodrome Theatre and in was soon taken over by the Associated British Cinemas(ABC) chain. After 1937, the Hippodrome Theatre began to screen second run films as ABC now had their new Union Ritz Cinema in the town.

The Hippodrome Theatre was closed on 23rd December 1956 with Burt Lancaster in "His Majesty O'Keefe" and Randolph Scott in "Carson City". The building was used for a final time for a record breaking attempt, then it stood empty and unused. In 1965 it was damaged by a fire, thought to have begun by tramps sleeping in the building. In 1968, two further fires did more damage and the building was deemed unsafe. It was still owned by ABC, and they were ordered to strip out the building and demolish it in September 1968. This left just a one storey wall standing until the late-1980’s, when the remains were finally demolished and shops with offices above, named Holly Bush House, were built on the site.