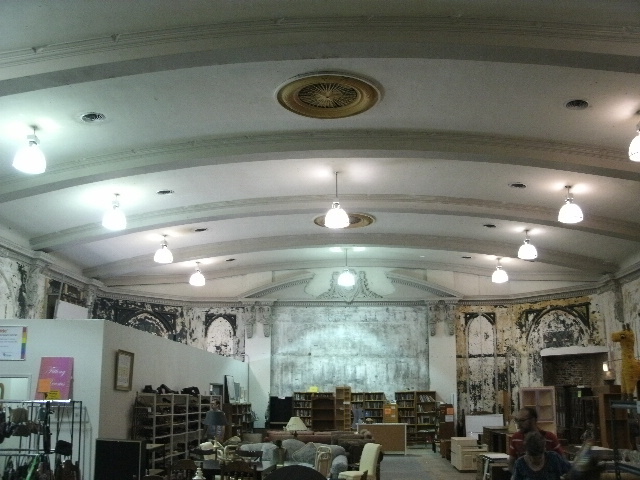 Opened November 20, 1915 for the Ascher Brothers circuit, the Calo Theatre, which originally seated 1,000, is located in Chicago’s Andersonville neighborhood on Clark Street near Balmoral Avenue. By 1964 it had been converted into a bowling alley. It was originally equipped with a 2 manual theatre pipe organ.

In the early-1990’s, the historic Calo Theatre, with its elaborate white terra-cotta façade, became the home of the Griffin Theatre Company, which put almost $100,000 into renovating and restoring the former movie house into a legitimate theatre, the seating decreased to just 135 in its main auditorium.

In the summer of 2004, the Griffin Theatre Company left the Calo Theatre due to rising upkeep and renovation costs, in search of a new home elsewhere in the city.

The Calo Theatre was acquired by Brian Posen in 2005, with the intention of converting the theatre into a three-auditorium venue for local theatre groups to rent, much like Lakeview’s Theatre Building, however, those plans never came to fruition. Instead, the Calo Theatre was reopened as a resale shop.

They should do something about that plaster so that no on e gets hurt.

Teddy’s comment above is almost correct. Reflections Theater, founded by Michael Ryczek, was in the Calo for several years (80s/90s). I was on the advisory board, did the graphics for the programs and marketing, ran a children’s theater program there for a time, and ran lighting too—as well as anything else that no one else had time to do. We were a happy group, but not terribly business-minded sadly. The theatre’s triumph was probably a fine production of Lanford Wilson’s Talley Trilogy.

Here is a nice photo of the Calo as a bowling alley.

The Calo was where cop-killer Gus Amadeo was watching his last movie before being ambushed & killed by Det. Frank Pape back in the 50s. You can read about it here:

Recent Edgeville Buzz article about the Calo Theatre. Mentions building designer George H. Borst again, who coincidentally was also involved in building The Elms hotel on Elm near State Parkway. Which housed many of the stage crews for the downtown live theaters in the 70's &80’s. The crews were always late night regulars when in town, at my late friend’s nearby tavern, the Hotsie Totsie Yacht Club & Bait Shop on Division. I got too meet many stars back then as a result. Yul Brynner, Sammy Davis Jr. etc. As the crew would sneak them in late at night.

Two circa 1964 photos as Calo Bowling.

This description of the Calo Theatre is from an article about the Ascher Bros. chain in the March 10, 1917 issue of Moving Picture World:

“Conspicuous in the construction of the Calo theater, on Clark street and Balmoral avenue, is the large foyer directly off the lobby. Oil paintings of various actors and actresses adorn the walls, and the fixtures are very unusual in design. Particular attention has been given to the seating arrangement in this theater. There are 1,000 comfortable seats on the main floor, and the spacious seating plan is noticeable. The Calo is managed by Joseph Koppel, who had had considerable experience as an exhibitor. His program selections continue to meet with the approval of his patrons, most of whom are ‘regulars.’ The house is open afternoon and evening, and the music is furnished by a large two-manual pipe organ. The cost of the complete building was close to $125,000. It fronts on Clark street and there are seven stores besides the theater proper.”