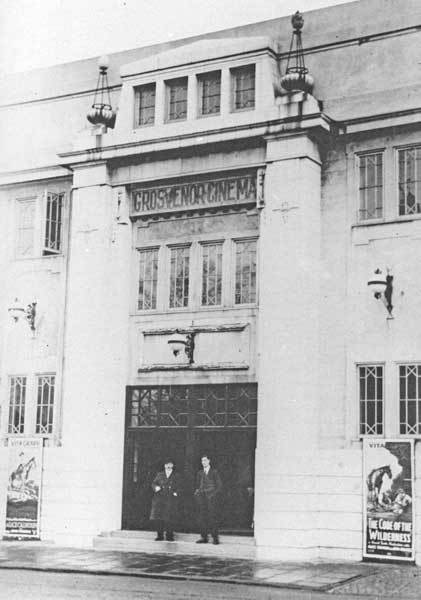 Located in Bloxwich, north of Walsall. The Grosvenor Cinema was opened on 11th December 1922 with Douglas Fairbanks in "The Three Musketeers". It was built on the site of the earlier Electric Palace Theatre (1912-1921), which had been operated by Pat Collins.

Pat Collins built the new Grosvenor Cinema, and it was designed by local Walsall based architects Hickton & Farmer. The facade is in a Classical style, faced with Hathernware terracotta. Inside the auditorium, the projection box was located at the rear of the stalls.

In November 1931, it was leased to Oscar Deutsch, and in July 1935, it was incorporated into his growing chain of Odeon Theatres, and was re-named Odeon. The Odeon was purchased by the Rank Organisation in 1947, and they closed the Odeon on 2nd May 1959 with Peter Finch in "Operation Amsterdam".

It stood empty and derelict for many years. In 1982, it was refurbished and re-opened as Flix nightclub. By 2001, it was in use as a council run youth club known as the Electric Palace. This closed in late-2011. In 2014 it was purchased the pub chain J.D. Wetherspoon and was re-opened as the Bloxwich Showman (in memory of Pat Collins) on 27th January 2015.

The former Odeon can be seen on the right of this November 2006 photograph:
View link

This page has both an exterior and interior picture of the Grosvenor/Odeon Bloxwich (scroll down a bit): View link.

The J. D. Wetherspoon chain have lodged plans for conversion into a Pub…

UpDate. J.D. Wetherspoons have granting Change of Use… To a Pub.. The Interior of the Cinema alas got damaged during the long years of dereliction. Nothing remains.. So anything They do is an improvement..