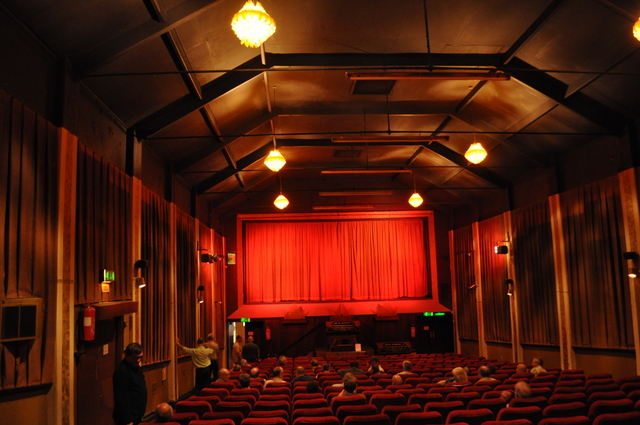 The Rex Cinema is located in Elland, south-east of Halifax. It dates back to 16th December 1912 when it opened as the Central Picture House with a seating capacity of 615. Originally, the screen was painted on the wall of the auditorium, and is one of only a few cinemas to have the screen at the front entrance end of the building. It later became the Central Cinema with 600 seats, later reduced to 480 and currently with around 300, all reflecting increased expectation of comfort.

It is a stadium style cinema that has had a very chequered history of closures and alternative uses. The Central Cinema closed on 31st January 1959 with Clark Gable in “San Francisco”. It reopened as the Rex Cinema 10 months later on 23rd November 1959, with Deborah Kerr in “Count Your Blessings”. Closed again on 3rd July 1964 with “Hollywood Canteen” it then operated as a full time bingo club until 1975.

The Rex Cinema re-opened again on 24th November 1975 with Simon Ward in “All Creatures Great and Small” and “Beautiful People”. Closed again on 27th August 1977 with “Rocky”, it was back to bingo club use until 1985, when the building was shuttered.

However it has now been ‘on screen’ since re-opening on 7th October 1988 after renovations were carried out. The re-opening film was Bette Midler in “Big Business”, and it has continued as a successful independent cinema ever since.

It is owned by Northern-Morris Cinemas who also have cinemas in Skipton, Keighley and Windermere.

A Conn 651 organ has been installed so that patrons now (every Saturday) have the luxury of a traditional ‘old-time’ experience of movie-going. Concerts are also given on a monthly basis.

The latest releases are shown, together with the occasional ‘classic’ film.

Photographs from the Rex, taken in October 2007, here

I remember this cinema being featured on Barry Norman’s Film (not sure of the year) programme,with Katie Derham taking the Rex’s projectionist on a tour of the new Warner (now Vue) multiplex in Leicester Square. Is he still involved with the cinema I wonder?