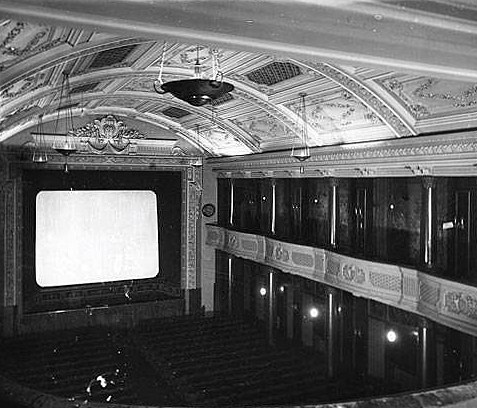 Located on Queen’s Square in the centre of Wolverhampton. The Queen’s Picture House was opened on 30th September 1914 with “Jelfs” and “Her Uncle”. It was built by the Associated Provincial Picture Houses(A.P.P.H.) chain. Designed by London based architects Robert Atkinson & George Alexander, it had a Neo-Classical style façade in white terra-cotta tiles. Above the entrance were three arched windows and a balcony. Inside the auditorium seating was provided in stalls, and a horse-shoe shaped circle. The cinema also had a café for the convenience of its patrons.

Taken over by the Gaumont British Theatres chain in February 1929, it was finally part of the Rank Organisation when it was closed on 7th February 1959 with Norman Wisdom in “The Square Peg” and Alec Guinness in “The Lavender Hill Mob”.

It was converted into a Top Rank Ballroom, known as the Queen’s Ballroom, which opened on 15th May 1959. The Queen’s Ballroom was closed in 1969, and the building stood empty and unused until it was demolished in late-1977 to early 1978. A branch of Lloyds Bank was built on the site in 1980.