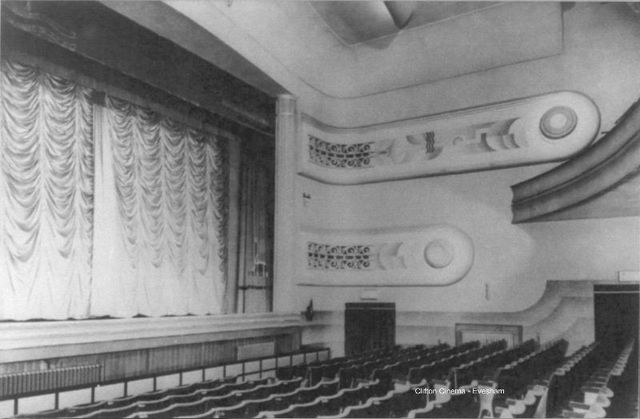 Located on High Street at the corner of Oat Street. The Scala Theatre opened on 1st October 1923. The opening production was “Cigarettes” a ‘Cabaret Concoction’ performed by the Ernest Crampton Company. It was designed as dual use live theatre & cinema. The stage was 24 feet deep and there were 5 dressing rooms. Initially screening silent films, a Western Electric Sound Sysem was installed in September 1930, and the Scala Theatre began screening ‘talkies’.

Taken over by Sidney Clift it became part of the Clifton chain in 1938 under Super Cinema and Theatre Ltd. The Scala Theatre was closed on 8th May 1938 with Pat O'Brien in “I Married A Doctor” and “Son of Pecos”. The cinema gained a new Art Deco style facade, and the interior was completely rebuilt to the designs of architectural firm Satchwell & Roberts.

It re-opened as the Clifton Cinema on 5th November 1938 with Will Fyffe in “Owd Bob”. Just after the death of Sidney Clift, control of this passed over to Theatre Administration Limited. The frontage of the cinema was re-built in the 1950’s to incorporate shops & offices for the Worcester Co-Operative Society. The last film show was on 20th March 1980 when Chuck Norris in “A Force of One” was screened.

The Clifton Cinema was then sold to Essoldo who ran it as an Essoldo Bingo club. It remained open for bingo and was then bought by Angel - a small bingo/cinema operation in the Midlands of England. Currently run as a bar named Amber.