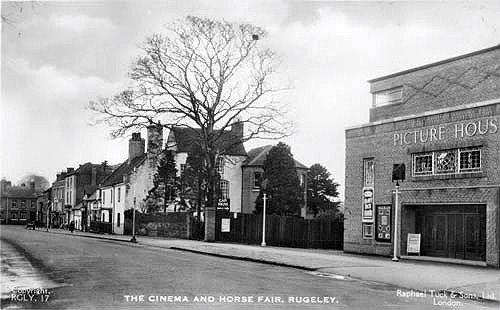 Located in the Staffordshire town of Rugeley. The Picture House was opened on 12th November 1934 with Jesse Matthews in “Evergreen” and Shirley Temple in “Pardon My Pups”. The Picture House was built by Charles K. Deeming & George E. Deeming for the Rugeley Picture House Ltd., part of the Charles K. Deeming Circuit. The Deeming’s had been operating the Palace Theatre in the town for the previous eighteen months, and this was closed when the Picture House opened. Seating was provided in stalls and circle levels. The proscenium was 40 feet wide, the stage 24 feet deep, and there were four dressing rooms. The cinema was equipped with Western Electric sound. Facilities included a free cycle park and a free car park.

By 1940, it had been re-named Plaza Cinema. The Plaza Cinema remained in the Deeming Circuit until later years, when it was sold to Ben Freedman, and was twinned. It was closed on 5th September 1996 with Will Smith in “Independence Day”. The building was purchased by the J.D. Wetherspoon chain of pubs, and converted into The Plaza, which opened on 20th May 1998.

A view of this former cinema as a pub can be seen here.