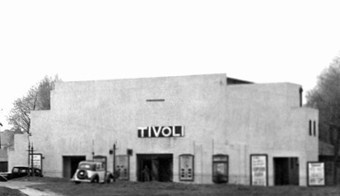 Located in Hednesford, near Cannock, Staffordshire. The wooden building began life as a skating rink in 1910. It opened as the Electric Picture Palace in 1912, but retained skating on two nights a week. Alterations were made in 1931, when the floor was raked. Western Electric sound was installed in January 1932, and it was re-named Tivoli Cinema.

It was re-built in April 1938 to the plans of Messrs. Linford of Cannock, although it was a rather plain building. Now having a balcony and seating for 720, the proscenium was 25 feet wide. The Tivoli Cinema was sold to Kennedy Theatres Ltd. of Dudley in December 1950. They sold it to Miles Jervis II in 1954.

The Tivoli Cinema was closed on 9th March 1963 with Dennis Price in “Watch It Sailor” and Robert Knapp in “Gunmen from Laredo”. It was demolished and a Co-Op supermarket now operates on the site.

A postcard view is here.