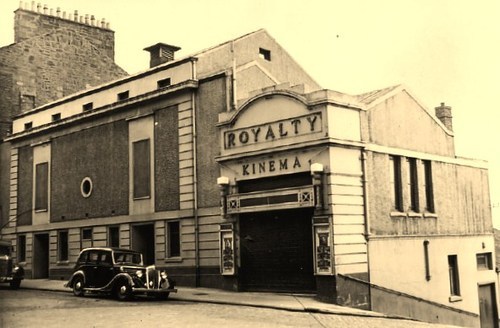 Located on the corner of Baffin Street and Watson Street. The Royalty Kinema was opened in 1919. It was designed by architects MacLaren, Soutar & Salmond.

In its later years it became part of the J.B. Milne circuit, and was closed around 1965 and was purchased by Dundee City Council for redevelopment. It was demolished in December 1971 and has since been replaced by housing.

the architects who designed the royalty also designed the plaza cinema on hilltown which jbm owned from 1958 strangely enough the plaza opened the year jbm bought his first cinema the new palladium in alexander street and within a few years had bought up a further two all within walking distance of each other these were the vic in 1935 and the broadway in 1939 the palladium changed its name to the rex in 1951 being renamed after his dog called rex dundee corporation compulsorly purchased the cinema and paid jbm £7,600 for it jbm originally paid just £360 for it in 1928

The Royalty was still open in 1968 when I started working in the nearby Ritz, Morgan Street. The projection room which was at the back of the stalls was poorly ventilated and extremely hot during warm weather. I recall the auditorium was very wide and from the front balcony the lower part of the screen was only just visible. The stage drapes were very attractive depicting an underwater motif with waves and fish. The Royalty was a popular local cinema, I remember a packed house for Robin and the Seven Hoods and a Norman Wisdom revival. At night the Royalty sign, illuminated in blue neon, was a local landmark. Jim Ryan was the last manager when the cinema finally closed circa 1970/1.