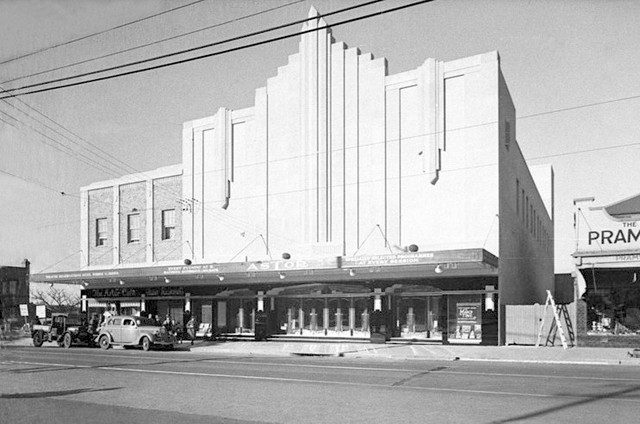 Built on the site of the Burwood Palais Theatre in the Burwood district of Sydney. The Astor Theatre opened on Wednesday, August 5th, 1934 with ceremonies from Mayor Reed and a double bill of Errol Flynn in “Captain Blood” and Buster Crabbe in Zane Grey’s “Drift Fence”.

The Astor Theatre was not as opulent as other Western Suburbs Cinemas Ltd. theatres and sported a clean Art Deco style look in contrast to its stable mate, the Burwood Palatial Theatre.

It had no Wurlitzer either and tried community sing-alongs for a while. It did boast air conditioning and the innovative lighting designs that Arnold Zimmerman created for the circuit.

It became Hoyts Astor Theatre in 1944 along with all 24 theatres in WSC Ltd. which merged with Hoyts Theatres chain.

The Astor Theatre was rebuilt as Hoyts Burwood Theatre but was encased into the Westfield Burwood Shopping Centre after it closed in around 1984. The shopping centre & the theatre have since been demolished around 1999 to build a new Westfield Shopping Centre.

I don’t think the theatre was demolished in 1966 for the building of Westfield but was encased by the new centre. It may have been demolished since as I haven’t been there since 1979.

No you’re right, it definitely wasn’t demolished and the Westfield (which itself is now demolished in favor of a brand new Westfield) encased it just like you said. The marquis and canopy remained intact as well as the interior. I am quite positive that the last movie to play there was Gandhi and it closed sometime in early 1984. The front was replaced by a Lowes (clothing) store. I too have been away from Sydney for many years but I know that this entire including what was left of the front of the old theatre was finally demolished sometime in late 1999 and 2000.

As far as I recall: The proscenium was wider and taller than the above depicted photo. It was wider to the extend of the width of the wall, and taller to the extent of the ceiling limit. This allowed for the presentation of widescreen movies with an aspect ratio of 2.40/2.35/2.2/1.66:1 as well as the original ratio of 4:3.

There was black-velvet masking used to change the screen size according to the exhibited movie’s aspect ratio.

There was only one set of curtains. It was honey/peanut butter-coloured. At the end of each corner of the auditorium, the curtains went in a 90 degree degree direction.

The curtains were lit by fluorescent lights covered by a diffuser.

The prism lights in the ceiling depicted above were replaced by a series of hanging gooseneck(s) light fittings.

There were three projectors; two for the movie projectors and one for the slide. The Roselands Theatre Beautiful had four. Given that most cinemas had their projection boxes at the back of the dress circle (upper) such as the Hoyts Burwood, the other Burwood cinema, Palatial had its projection box at the stalls. Unusual.

The auditorium was surrounded by small wall-mounted speakers for surround sound.

The external appearance of the theatre was that it incorporated the yellow brickwork of the new (1966) Westfield shopping complex. If you observed carefully, the cinemas’s brickwork extended out slightly out with the rest of the shopping complex.

The outside sign was the name “Hoyts” arranged vertically.

Though the replacement Event Cinemas have better sound, larger screens and more comfortable seats, I miss the brightly lit former Hoyts (Astor) and the presentation with curtains.

A while ago there was an aerial photo showing how the old cinema was incorporated into the 1966 building. The cinema roof is clearly visible.

Westfield Burwood Shopping Centre was one of the first shopping centres in Australia(if not the first?), maybe even the southern hemisphere!? What did the theatre space become after the theatre closed in 1984 until the shopping was closed and demolished? There is another cinema in the shopping centre there now(Event Cinemas Burwood), unknown if it is in the same area as the original theatre building!?