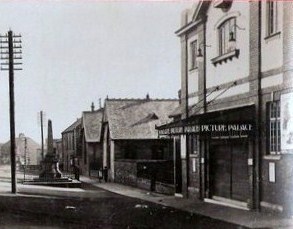 Located in Wingate, County Durham. The Palace Theatre was opened as a mixed use cinema/theatre on 29th November 1913. The proscenium was 24 feet wide and it had an 18 feet deep stage. There were two dressing rooms.

It was equipped with a Western Electric sound system around 1930. When CinemaScope was installed in the mid-1950’s, the proscenium was widened to 27 feet.