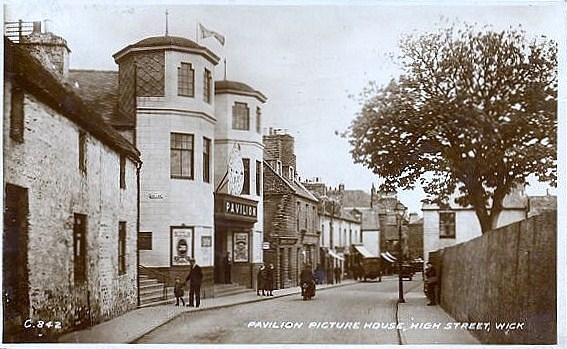 Located in Wick, Caithness in the Highlands of Scotland, on High Street at the corner of Oag Lane. Opened in 1930 as a skating rink. By 1934 it had been converted into the Pavilion Cinema, operated by Wick Playhouse Ltd., and films were booked at the Playhouse, Inverness. By 1937 it was operated by A.B. King’s Caledonian Associated Cinemas Ltd. It had a 26 feet wide proscenium.

In the 1950’s, when it was equipped with CinemaScope, the proscenium was 35 feet wide. By 1980, it was still operated by Caledonian Associated Cinemas, but had gone over to part time bingo on certain nights a week.

It was later converted into a nightclub, and was gutted by a fire in 1996. Only the lower portions of the front and side walls remained standing until August 2020 when they were demolished.

A picture of the Pavilion Cinema taken in 1947 can be seen here and this webpage shows additional pictures and memorabilia.