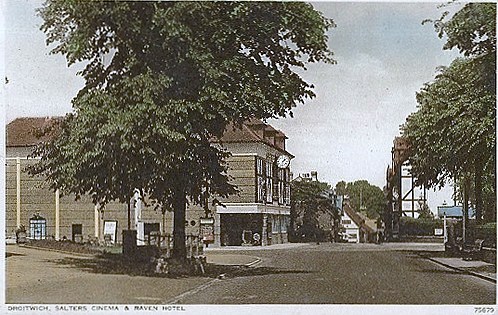 Located on the corner of Saint Andrews Street and Victoria Square in Droitwich, Worcestershire. Originally on this site had been the Salters Hall, which eventually became a cinema. It was demolished in 1933, and the New Salters Cinema opened in 1934. Designed in a Tudor-Revival style to fit in with other buildings in this spa town, there were originally 438 seats in the stalls and 212 seats in the circle. The auditorium walls were lined with large paintings depicting fox hunting scenes. There was a cafe attached to the building.

After CinemaScope was installed in the mid-1950’s it was listed as having a 28 feet wide proscenium. The New Salters Cinema was closed in 1963. The building lay empty and unused for many years until it was purchased by the local council and converted into a library in the early-1980’s.