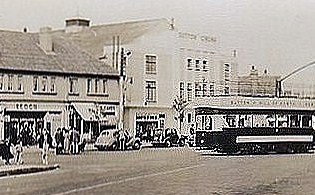 Located on the corner of Station Road and Howth Road in the northwest Dublin suburb of Sutton Cross. The Sutton Grand Cinema was opened on 4th January 1937 with Fred Astaire in “Follow the Fleet”. It was independently operated by Leonard Ging, who owned a few other cinemas.

The Sutton Grand Cinema was closed on 16th September 1967 with “Hotel” and “Infamous Conduct”. It was purchased by the Quinn family and converted into Quinn’s Supermarket. In 1980, the building was badly damaged by a fire, and was rebuilt with a new facade. Quinn’s had their headquarters in the building, but in recent years, it has been demolished and retail and office premises have been built on the site.