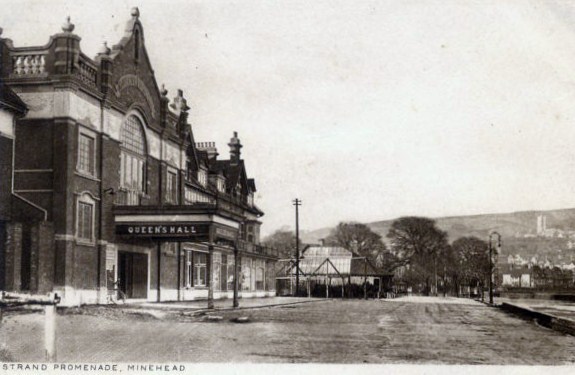 Located on the seafront at Minehead, Somerset. Construction of the Queen’s Hall began in August 1913 and it opened on 1st June 1914 with the play “Oh! I Say”. It was designed by local Minehead architect W.J. Tamlyn for J.B & Sam B. Marley. Seating was provided in orchestra stalls and balcony, and there were two boxes. The proscenium was 28 feet wide, and the stage 18 feet deep. It was equipped with a projection box, located high above the balcony. The first film was screened on 13th June 1914; “Sixty Years a Queen”. From then on-wards, it had a mix of live theatre and cinema use.

In October 1930 it was equipped with a Western Electric(WE) sound system and screened George Arliss in “Disraeli”. From 1936, the Queen’s Hall was operating as a cinema in the summer months only.

After the outbreak of World War II in September 1939, the Queen’s Hall was closed and was used by troops as a canteen. It never re-opened as a cinema, and later became an amusement arcade. By 2009 it had been converted into the Mambo bar and restaurant.

Stated to have been closed on the outbreak of war but, and I could be wrong, I seem to remember seeing a play there in 1941 “Canaries sometimes sing” with Tom Walls. I was only seven at the time and attended with my Mum and Dad; he was stationed locally in the army.

In Feb 1928 the retired actor and Variety Artiste Ernest James Heathcote (1870-1943) took out a theatrical license on this cinema and two other premises in Minehead.