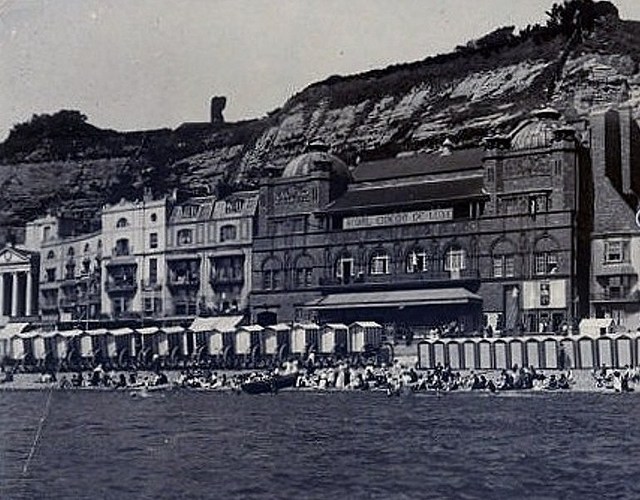 Located on the sea front in Hastings, East Sussex. The Empire Theatre of Varieties was opened on 2nd April 1899 with Marie Lloyd topping the bill. It was designed by noted theatre architect M. Ernest Runtz. The auditorium runs parallel behind the 131 feet wide façade. Seating was provided on orchestra, dress circle and balcony and gallery levels. There were eight private boxes. The sumptuous interior was decorated in Italian marble and brass handrails.

It was re-named Marine Theatre of Varieties in 1901, and in 1906 it became the Hippodrome Theatre. It was closed as a live theatre suddenly in 1910. On 18th October 1910 it re-opened as the Royal Cinema De Luxe with the film “"The Angel of Dawson’s Claim”.

In the 1930’s, it was operated by the Union Cinemas chain and was re-named Union Cinema De Luxe. After several changes of name, The Deluxe Cinema was closed on 24th July 1965 with Ursula Andress in “She” and “Jimmy Saville Presents…Pop Gear”. It was converted into a bingo club, but the Cinematograph Licence was retained for several years, just in case it needed to revert back to cinema use. To keep the Licence, a reel of film (18 minutes) had to be screened each bingo session. This continued until March 1970, when the auditorium was gutted and a new floor was inserted across the space.

It re-opened as the De Luxe Leisure Centre, containing an amusement arcade, bingo club and a snooker club.