St Mary in the Castle 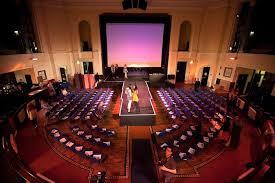 St Mary in the Castle is an art centre on the seafront of Hastings Old Town. It gives it’s address as 7 Pelham Crescent but patrons gain admittance from Pelham Place. The part that forms the auditorium is the centre piece of the magnificent Pelham Crescent and is one of the most achitectually significant buildings in the entire south coast.

St Mary in the Castle isn’t in the Hastings Castle grounds at all but sits at the bottom of the cliff upon which the castle’s remains stand. Just as a matter of interest, Hastings Castle was the first stone castle to be completed. In 1823,a part of the castle was removed and the cliff carved away to make way for St Mary in the Castle, which was originally built as a church. The foundation stone was laid in 1824 and it was completed in 1828, when it could welcome 1,500 worshipers.

It was made a Grade II listed building in 1951 and went into a period of decline, closing as a church in 1970. By the mid-1970’s, it had fallen into such a state of disrepair that it was considered for the dangerous buildings register.

In 1986, the Pelham Arcade, which is situated beneath the church and behind Pelham Place was recognised as a Grade II listed building, just like St Mary in the Castle and work on restoring the arcade is ongoing in 2016.

Hastings Borough Council acquired the freehold to both St Mary in the Castle and number 7 Pelham Crescenty and the Friends of St Mary in the Castle (F.O.S.M.I.C) were formed. It opened as an art centre in 1998 and one of its first concerts was by singer Eartha Kitt. It also had 35mm equipment for film shows.

The venue closed for some time due to its lease expiring and through funding being stopped but it is again up and running.

The auditorium with it’s domes roof, box pews, gallery, cupola and original stained glass windows is used to stage events ranging from contemporary live music to classical, opera and theatre. It is also home to the Hastings Philharmonic Orchestra and can now have weddings. The seemingly miles of catacombs under the venue and the cliff behind are assessable to the public. The venue also has a cafe at street level and a bar in the auditorium.

Weekly film shows of cult, classic, art house and worthy re-runs were added to the round of entertainment on offer and these resumed in January 2016, but have ceased by 2018. It now has a seating capacity of 600.