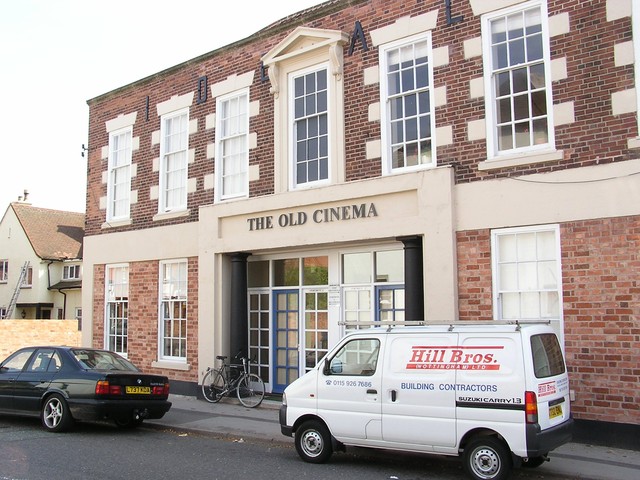 Located in Southwell, Nottinghamshire, to the west of Newark-on-Trent. The Ideal Cinema was opened in 1932. It had a 32 feet wide proscenium and small stage with two dressing rooms. There was also a ballroom in the building. In 1929 it was equipped with a British Acoustic(BA) sound system.

It’s still called The Old Cinema but now consists of apartments. The Old Theatre Deli is further down the road and used to be a Georgian theatre. http://theoldtheatredeli.co.uk/index.php

The Ideal Cinema was located on Westgate in Southwell (NG25 0LL), not Market Place. It was built by local builder W. D. Tuck on the site of the former Westgate Brewery which had been demolished in 1930. The 600 seat cinema opened in 1932 with two nightly performances from Monday to Saturday, plus a matinee performance on Saturday. The building included a stage and plays were performed there at various times. A social club was established in a separate building at the rear of the auditorium. The cinema foyer was flanked by two shops – a flower shop run by Kathleen Tuck and an electrical supplies shop. Dances and public meetings were held on the upper floor. By 1950 it was owned by Jayel Cinemas (Southwell) Ltd and after a number of changes in ownership, the cinema finally closed on 6 February 1962. In 1970 it was the head office of Theatre and Display (John Griffin) Ltd, suppliers of stage scenery and lighting services for theatres. At a later date the building was used by Pressac for the assembly of telephones. This ended in 1989 and in 1992 the foyer was converted into a flower shop and greengrocers.