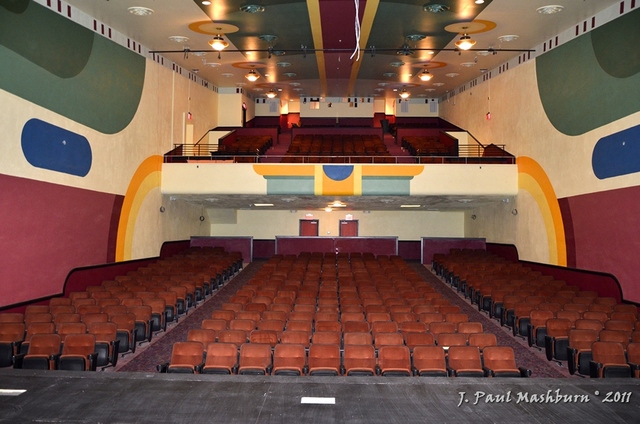 Opened November 16, 1939, replacing an earlier Princess Theatre which was destroyed by fire. This theater, the last of four in Harriman, closed in 1999. However, a restoration was planned by actor Muse Watson (the guy with the hook in “I Know What You Did Last Summer”), who lives in the area. Renovation and restoration work began in 2003. Renovations were completed for a March 22, 2012 reopening as a live theatre.

Simple answer, no, there is no inner shell…it was completely destroyed in ‘39 and rebuilt that same year.

Here are a couple of links: http://princesstheater.blogspot.com/2009/02/princess-theatre-temple-of-arts.html

As for Crescent Amusement, I think you are correct, however I’m not sure of the owner name. Here are two more links concerning the memories of Dub Harmon:

Patsy…if you are involved in the restoration, please don’t hesitate to contact the Princess Foundation for lessons learned.

No I am not involved in the restoration though I do wish them well.

A short film made when the Princess reopened in 1939 can be seen at YouTube (I believe this film was previously linked, but the comment with the link has been removed.) The film consists mostly of scenes in Harriman, including schools, churches, factories, and shots of various worthies such as civic officials and members of the Rotary Club. A few scenes, mostly in the last couple of minutes, show the Princess Theatre.

One significant scene shows Crescent Amusement Company head Tony Sudekum greeting architect Joe Holman, so the Princess, like most Crescent houses of the period, was designed by the Nashville architectural firm Marr & Holman.

Where is Harriman TN?

It appears to be about 40 miles West of Knoxville, and 80 miles North of Chattanooga.

This is correct, just off I40 in Roane County.

So nice to know it has been restored as my hometown is forever gone. Neglected for 10 years and nobody at the time tried to save it. Felt it was an eyesore .. debateable issue still to this day.