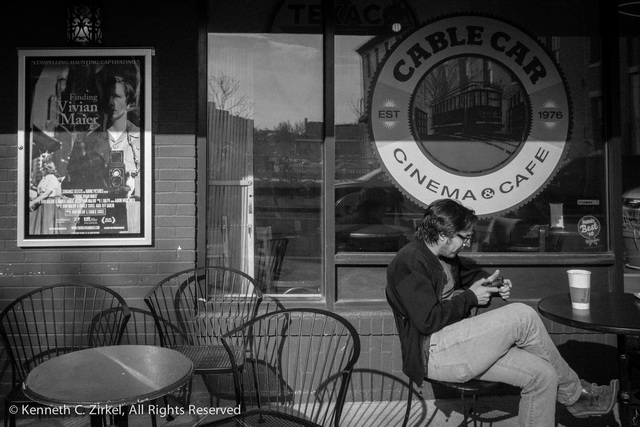 Operating since October 30, 1976, known as a very comfortable place to see arthouse fare, the Cable Car Cinema has couches and other comfy chairs to sit in. Before shows begin, the theater usually has performers (such as singers) on stage to entertain the audience. The Cable Car Cinema & Cafe was closed on May 27, 2018. They have moved their events into the Columbus Theatre. In September 2019 it was announced that it would reopen as the Acoustic Cafe and Microcinema.

Moved from RI to CT ten years ago, so have not seen the Cable Car since then. I did patronize it often through the years, even though I believed those couches just might be unsanitary! Almost invariably, the film was interrupted by some sort of projection difficulty. But it was a fun place, even lunching outside.

Here’s a nice history of the Cable Car Cinema. Originally the building was a truck garage of a moving company. The name comes from “a classic cable car that was left behind”. The cafe was added around 1989.

My first visit to the Cable Car Cinema was on February 2, 1977, about three months after it had opened. I noted to myself: “A cold Groundhog’s Day. Tonight I saw "Le Secret” at a very cold Cable Car Cinema, the one with the couches, on South Main Street.“ (I remember that French film as being very good.)

Is the cinema and cafe in a cable car?

The Cable Car Cinema has been closed for nine months!

Opened with “Homecoming”. Closed with “RBG”.

Their website is still up, and it appears they’ve moved their events to the Columbus Theater.