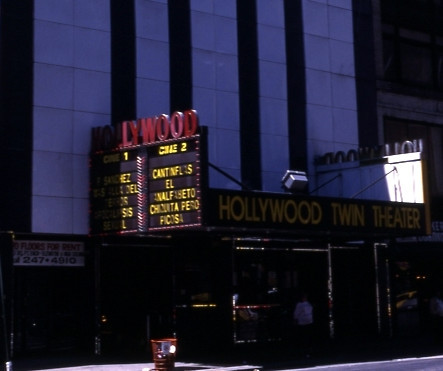 In late-2013, one of the former screens was reopened as an off-Broadway theatre known as 777 Theatre. Seating is provided for around 150 seats. The Big Apple Bus Company still operates in the other auditorium.

was 47th/48th on 8th Avenue as prostitution- infested as it was down by the Port Authority or was it tamer? would you see it by the Ramada(now the Hilton Garden), Firehouse and Blarney Stone(now its the Social Bar)? if so did the hookers hang out in groups with pimps or was there less “traffic” up there?

I think the Hollywood Twin Cinema was right next to B Smiths. Moulin Rouge escapes me. the Lighting Store, Ray’s Pizza, further up I recall well.

as a teen in the late 70’s mostly when i would pass thru this block of Eighth it seemed quiet but i do recall one time i saw prostitution and drug addicted people on this block, so i always wondered what it was like normally.

I found an old Hollywood Twin schedule flyer, that dates back to mid-September thru mid-October, 1981. I uploaded images of the flyer to the photo section, above. The full image shrinks down a bit too small to read, so I also uploaded a close-up of the top, plus a bit of the reverse side, showing what the prices were. Apparently, regular admission was $4.00 for a standard revival double feature. However, deep discounts were offered for package deals!

Surprisingly, many of the titles on the schedule were fairly recent releases – some from earlier in 1981 – although, typically paired with much older films. A lot of films from the 1970’s figured into this particular schedule, with only the pairings of “Grand Illusion” with “Paths of Glory,” and “All About Eve” with “A Letter To Three Wives” harkening back to Hollywood’s classic studio era.

Perusing the photos of the theater, and reviewing the comments history, I think the proper original name for this, as advertized on front of the marquee, was Hollywood Twin Cinema (not pluralized). The marquee appears unchanged from the 1976 image taken from “Taxi Driver,” to some of the early 1980’s images posted from its revivial days. At some point, it appears the marquee was updated to feature yellow lettering over black background (I recall this look on several theaters in the area towards the end of the line), and the name changed to Hollywood Twin Theater. During this period, the side boards for the individual auditoriums were labeled “Cine 1” and “Cine 2.” It also appears that it may have had a go as a Spanish language cinema during this time, as evidenced by this pic, posted by CT member William a couple of years back.

not too far from this theater…saw it on channel 2 news…https://www.google.com/url?sa=t&rct=j&q=&esrc=s&source=newssearch&cd=1&cad=rja&uact=8&ved=0CB8QqQIoADAA&url=http%3A%2F%2Fnewyork.cbslocal.com%2F2014%2F11%2F11%2Fsearch-on-for-men-who-robbed-store-in-diamond-district%2F&ei=54diVPX5AYWsyATEo4Ao&usg=AFQjCNEFqqeMVAwnPbYBjoeXXGisx8xzmg&sig2=rZASgJbx_sIYJUeEdVLqNA

Correction to the above description: there’s only one 150ish seat theatre at this space. The other two blackbox theatre spaces mentioned are nearby at 8th & 43rd, and owned by the same company (Roy Arias Studios), so they’re on the same website, but those are not here. The current 777 theatre is really just on of the two former movie auditoriums converted to live theatre use, while Grey Line Sightseeing is still using the other one. (It’s also not a triplex, nor has it ever been.)