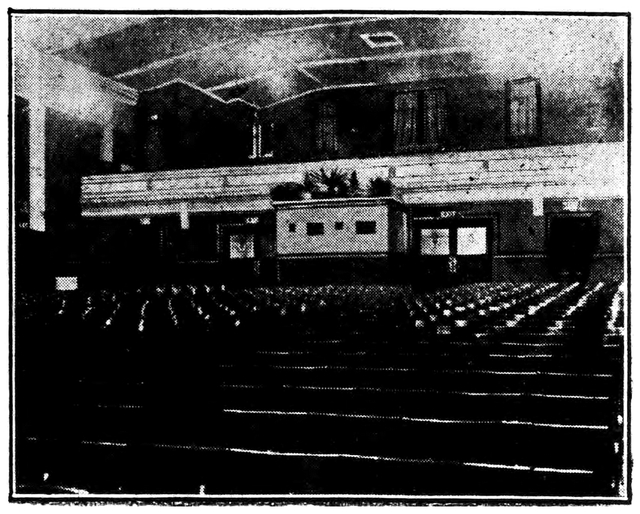 The Picturedrome on Brougham Street, in the Stoneyholme district of Burnley, began life as an infant school built about 1885. It was converted into a cinema in 1911/12 and was granted the necessary licences on Thursday 7th March 1912. The operator, Mr William Hensby told the magistrates that it had 350 seats and 5 exits. It is not listed in the Kinematograph Year Book for 1914.

A replacement, purpose-built, cinema was erected next to the former infants’ school and was formally opened on Friday 25th February 1921. The converted school became the parochial hall for St. James’ Church until the church closed in 1998.

In KYB 1927, 1928 and 1929 the new cinema is listed as the Picturedrome and the owners as the Burnley Cinema Company.

At some time in the mid-1930s the trading name changed to Majestic Cinema, perhaps when the British Talking Pictures(BTP) sound system was installed, and in KYB 1940 the owners were Majestic Cinema (Burnley) Ltd.

In KYB 1954 it has been renamed the New Majestic Cinema and is owned by Albert Bass.

Both the school and purpose-built-cinema buildings still stand (2015). The latter is a mosque.

The Kinematograph Year Book for 1957 has the cinema trading as the Majestic, owned by Albert Bass. The sound system is Gaumont-British Duosonic and there is a CinemaScope screen of 26ft by 16ft in the 27ft wide proscenium.

The old building is referred to as a former “Church of England Mission Hall” in a newspaper report of the opening of the new building in February 1921. The architect of the latter was a “Mr A A Bell of Cannon Street, Burnley”; and its projectors were Kalee Indomitables.