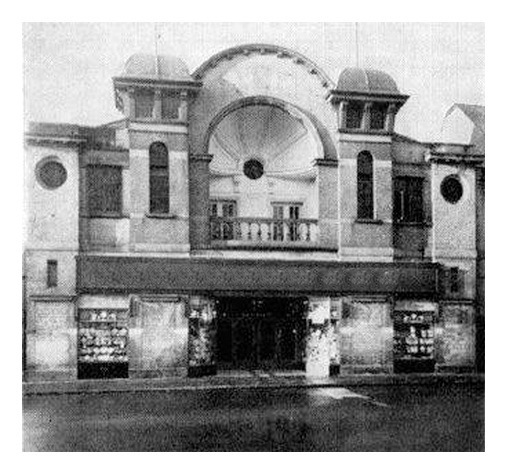 Located in Bulwell, near Nottingham. Designed by Frederick Bull, the Olympic Theatre was opened on 17th May 1915 as a music hall, with films as part of the programme. The opening day film was “Revenge of Thomas Atkins” and the ‘Human Submarines’ a female aquatic act ‘direct from the London Palladium’ topped the bill. The Olympic Theatre closed as a music hall in March 1922.

It re-opened as a drama theatre in January 1928. By October 1928 it was screening films to fill weeks when there were no live performances. It was closed on 19th December 1931 due to subsidence from a coal mine which was underneath the theatre. Repairs were eventually carried out and it re-opened in February 1932 and a Picturetone sound system had been installed. Further subsidence caused the theatre to close on 20th May 1939.

The Olympia Theatre remained closed during World War II and was used by the Ministry of Food as a store. Repairs were not carried out until 1948, when it re-opened 1st January 1949 as the Olympia Variety Theatre, a live theatre during the winter months and cinema use during summer. The Olympia Variety Theatre was finally closed on 12th July 1952, in its final years it presented mainly nude shows.

The building was converted into a store for F.W. Woolworth in December 1952 and the decorative façade was removed. By March 2009, they had vacated the building and it became a B&M Bargains supermarket.