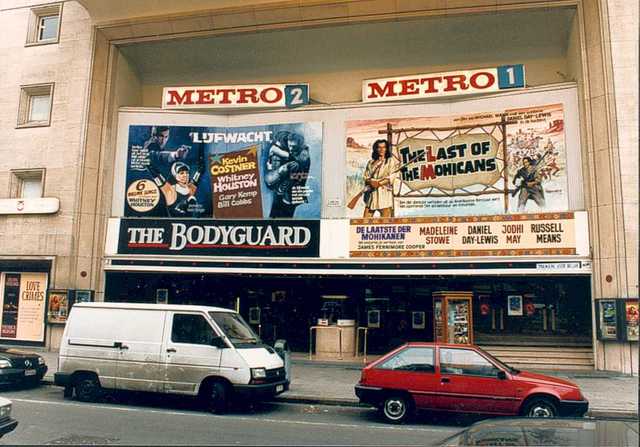 Opened as a theatre named Scala Theatre in 1886, it began to show films from 1904. In 1935 it became a permanent cinema after renovations to the plans of architect Leopold van den Broeck. Seating was provided for 850 in the orchestra and 600 in the balcony. In 1944 the bombarding of the Rex Cinema nearby caused damage to the Scala Cinema.

It re-opened in 1947 and came under the direction of MGM distributors like the Cameo Cinema and Queens Hall Cinema in Brussels, which where only showing MGM films. Re-named Metro Cinema, Elvis Presley in “Jailhouse Rock” was shown at the Metro Cinema in March 1958, first-run for Belgium before Brussels. MGM had sold their cinema in Brussels in the late-1950’s and also in Antwerp.

The Metro Cinema was over taken by George Heylen’s Rex Cinema concern. In 1965 “Goldfinger” attracted over 20,000 admissions and was then moved over to the Savoy Cinema on Astridplein. In 1981 Heylen twinned the Metro Cinema with the second screen in the former balcony. It was closed in 1993 due to the bankruptcy of the Rex company and it was demolished, the site is now included in the multiplex complex UGC Antwerpen.

I enjoyed the fact that you liked my website www.antwerpcinema.be with all the info on the cinema’s in Antwerp.