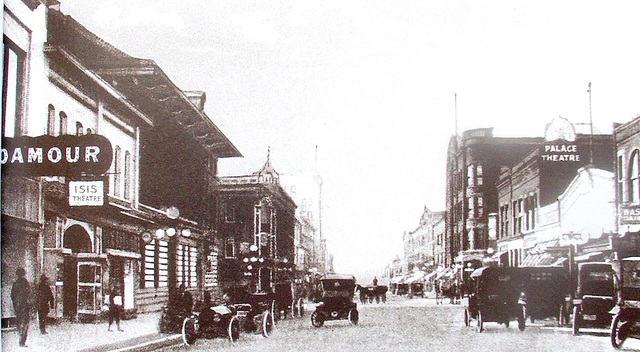 The Isis Theatre was opened in late-1913 by Clement & Sutherland. It was in operation at least as late as 1927, when it was part of the Paramount-Publix affiliated chain A. H. Blank, along with the Rialto Theatre, the Strand Theatre, and the Palace Theatre, which was almost directly across the street.

The Isis Theatre was demolished in 2014.

Though it was still standing when the current Google Street View was made, this page says that the building was demolished in April, 2014. Farther down the page it says that the Isis operated until the end of the silent era, and in 1930 was rebuilt as offices by Western Union.

CharmaineZoe provides this vintage photo of the Isis Theatre, probably from around 1926, the year the movie Midnight Sun was released.