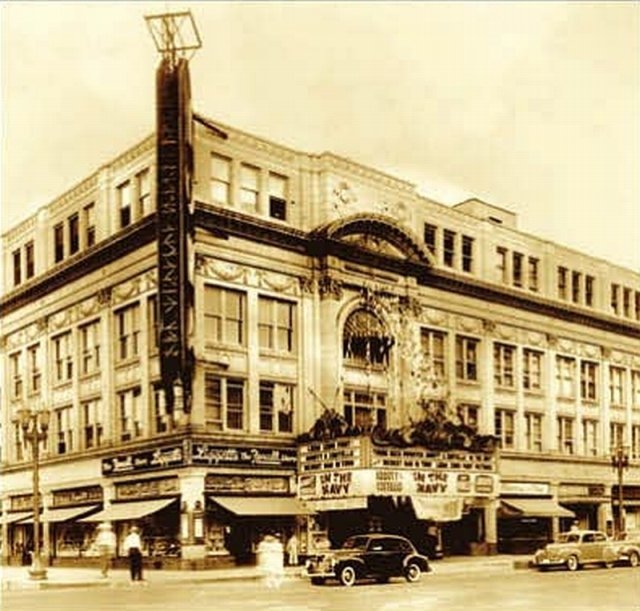 The Iowa Theatre first opened its doors on June 6, 1928 as a vaudeville and movie house. The originally 1,800-plus seat theatre (later reduced to 1,500) was beautifully furnished with ornate antiques and offered one of the first crying rooms for mothers with fussy babies. A Rhinestone Barton theatre organ dominates the orchestra pit–and is the only one of its type still in operation today. Live acts were performed in front of the silent movie screen to the accompaniment of the organ.

A year after it opened, vaudeville acts took a backseat to the more popular moving pictures. For the next 50 years, the Iowa Theatre, with its hallmark two-story ear of corn on the corner facade, was one of Cedar Rapids' largest and most popular movie houses. Shortly after closing its doors as a movie theatre in 1980, the Iowa Theatre became the new home to the Cedar Rapids Community Theatre.

Over $2.5 million was raised in two capital campaigns to re-adapt the facility to a 513-seat, handicapped-accessible, proscenium-stage theatre. Rehearsal space, dressing rooms, a new green room and administrative offices were added. Much of the original grandeur was retained, while adding state-of-the-art lighting, sound and stage rigging systems.

Four years ago, the scene shop was moved to a spacious off-site location. In addition to the mainstage season, the facility remains busy throughout the year with other events, ranging from stand-up comedians to puppet shows to symphony chamber concerts.

Today, the Iowa Theatre Building is still home to Theatre Cedar Rapids, which is among Iowa’s largest community theatres.

Here is a November 1961 ad from the Cedar Rapids Gazette:
http://tinyurl.com/cwwhe4

The renovation of the Theatre Cedar Rapids and the Barton has already commenced, and is scheduled for completion by spring 2011.

Here is a photo of the partly submerged console of the Barton at the Theatre Cedar Rapids:

Here is a photo of the toppled console of the Paramount Wurlitzer:
View link

A more detailed set of articles on the restoration progress of both theatres and organs with more photos and updates can be found at the main CR-atos page: http://www.cr-atos.org/

Theatre Cedar Rapids reopened with Mel Brooks “The Producers” in February 2010. The original chandeliers that hung in front of the organ chambers were located in the warehouse of a local antique collector and were refurbished and donated to the theater. They are back in their original location.

The ticket lobby had the 1965 decoration removed and plaster work and lighting fixtures were restored to the 1928 appearance.

New restroom areas were added in the lower levels of the theater lobby (they had been sealed off in 1965 and were not reused in the 1983 remodeling).

The new color scheme of the theatre echos earlier colors used by the theater and is quite attractive. The ugly plastic reflector panels that were hung in front of the proscenium in 1983 were removed.

The stage floor was rebuilt with a new removable trap section. New mechanicals were added and a new lift for the organ console has been installed (ready for the return of the organ next year).

The theater lobby was expanded into the store fronts of the building and the theater now has the capability to host catered events. New rehearsal and dressing room space was aquired in the basement and upper levels of the building. It is quite an impressive reuse of the space and very functional.

Here is a link to the Cedar Rapids Gazette article about the reopening and some really nice pictures.

Here is a video from FEMA who provided $4 million towards the renovation.

The replacement console for the organ is currently under construction and the solo chamber is being rebuilt.

O.F.Paulson Co., currently listed in the Firm field, is a construction company. The Iowa Theatre was designed by George Fisher, an Omaha architect who was at one time partnered with Louis Mendelssohn and Harry Lawrie.

The August 11, 1928, issue of Motion Picture Times has an article about the Iowa Theatre, with three photos.

There are two photos of the Iowa Theatre after its post-flood renovation on this page of the web site of Ryan Companies US, Inc., the construction firm that did the restoration and associated remodeling. The design of the project was by OPN Architects.

The book Cedar Rapids: Downtown and Beyond, by George T. Henry and Mark W. Hunter, says that the Iowa Theatre closed as a movie house in 1983.

Local banking house Cedar Rapids Bank & Trust is sponsoring a classic movie series at the Iowa Theatre (schedule here). TCR’s web site doesn’t say anything about the medium of presentation, but the bank’s web site says Movies are projected digitally in HD via a state of the art Blu-Ray projector whenever available in that format. Still, it’s only five bucks (the bank also gives away a limited number of tickets free) and you do get to see the movies in a classic theater.

The Barton organ is now playing! There remains some work to do with wiring and some console components. Visit this website for more info on the Barton and the Wurlitzer at the Paramount. www.cr-atos.org