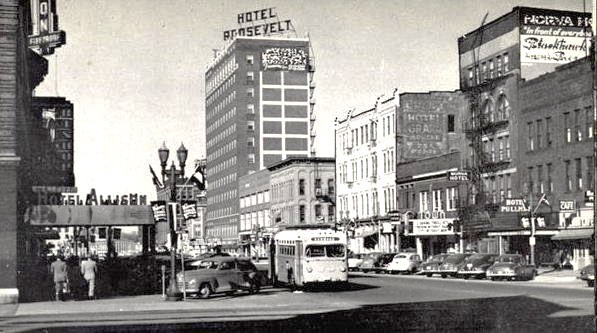 The Town Theatre was a one level movies-only theatre opened in 1907 as the Delphi Theatre. It’s stated purpose was to show “educational photoplays”. In the 1910’s, the theatre was renamed the Crystal Theatre. From August 18, 1923 it was known as the Rialto Theatre.

While the theatre was known as the Rialto Theatre it gained a not-so-flattering nickname, “the Rat-Hole”. The hotels that surrounded the theatre used to empty their trash in the alley, the rats would run through the theatre as they moved between the hotels!

In 1948, the theatre changed hands and became the Town Theatre. While it operated as the Town Theatre, it showed primarily adult films (grade Z exploitation films of the 1950’s) during the week and kiddy matinees on the weekends.

Nobody mourned the theatre when it was torn down in the late-1950’s as part of urban renewal.

More pictures and info can be found at www.jeffkorns.com

The lobby for the US Cellular Center arena stands about where the theater stood. It was across the street from the Iowa theater and the Columbia theater and next door to the Grand (Lyric) theater located in the Grand hotel building. Both the Grand and Columbia were short lived converted store front theaters. Interestingly enough, larger entertainment venues replaced all three theaters.

The Town and Grand were replaced by the arena and the Columbia by the Iowa theater building.

The 1927 FDY lists the Rialto Theatre as one of four houses in Cedar Rapids that were operated by Paramount-Publix affiliate A. H. Blank. The others were the Isis, the Palace, and the Strand.

Launched as the Rialto Theatre on August 18, 1923 with “The Midnight Cabaret” and “The Man Next Door”

A couple of early mentions in The Billboard in October, 1908, call this house Delphi’s Electric Theatre, and report that it was “…doing good business with moving pictures and illustrated songs.” The manager was named I. P. Williams.

Here is a photo of the house from somewhat later, when it was called the Crystal Theatre.