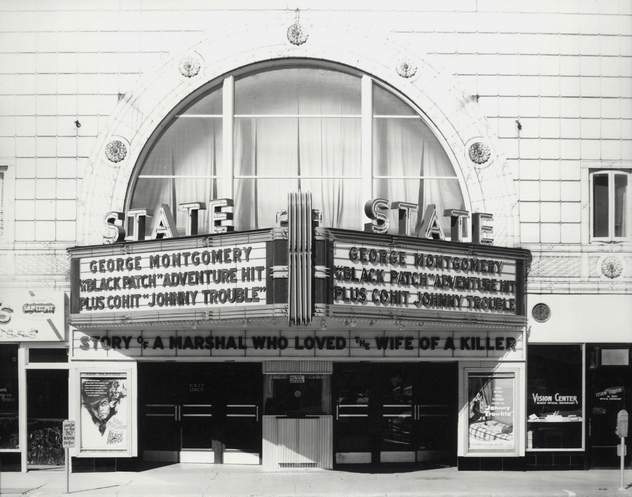 The Strand Theatre opened October 18, 1915. Seating capacity was 1,500. It was the first theatre in Cedar Rapids with a cantilevered single balcony (previously theatres had multiple shallow balconies, with posts supporting them and blocking views). It was decorated in ivory and old rose and had twelve loge boxes and a fancy mural over the proscenium sounding board.

It opened as a legitimate theatre with a stock acting troupe. The management of the theatre hedged its' bet, by installing a photo player. A year later the actors were gone and movies and vaudeville were in.

In 1930 the theatre was taken over by the Paramount-Publix chain and renamed the State Theatre. In 1958 it was again modernized and fitted for CinemaScope, and renamed the World Theatre, opening with “Ben Hur”. Closed in 1981, it sat vacant until 1999 when a church occupied the theatre which had been partially renovated into retail space.

A temporary drop ceiling was installed from the front edge of the balcony to the proscenium, and then again on the stage area. This effectively makes a one story area, new HVAC was installed for this main floor. The slope was also removed from the main floor, raising the level at the stage by 5 feet.

In 2003 a teen nightclub and performance venue called the Nexus opened, which has since been closed.

I have toured the balcony area and severe, but repairable damage has been done. The opera boxes flanking the proscenium were hacked off in the 1930’s remodeling. During the same remodeling, planking was used to cover the walls of the balcony. Recently, that planking has begun to fall off of the walls reveling the original paint scheme and stenciling, all in surprisingly good shape.

After the Strand (World) changed to the State theatre in 1930 the former Olympic theatre at 5101 16th Ave SW became the Strand.

The theatre is gutted now. The bank that owns the building kicked out the night club and a non profit group wants to turn it into an ethnic diversity center (the bank prez’s wife heads the group). They haven’t figured out what to do with the building but everything behind the entryway was gutted (the balcony, and even the plaster on the walls and ceiling were stripped. When I last got into the building the framework for the balcony was there and the wood framing of the proscenium was intact and sections of the plaster at the top of the proscenium had purposly been left in place.
The entryway was reopened to its' original 2 story configuration and tilework and terra cotta that had been covered were revealed for the first time in 60 years. The remnants of the two original ticket booths were uncovered.
The only thing that has been announced for certain is that the facade is to be restored and relit and a replica of the 1915 marquee is to be installed.

The Nexus website is still up and running:
http://tinyurl.com/rst5t

Yes but they are now meeting in various venues. Jason hasn’t updated his website since they left the theatre. The theatre is sitting there and not much has happened since the destruction of the interior. They did board up the front.

The non profit group that gutted the building completely (balcony, plaster, everything) is now out of business. The building is just an empty shell. Apparently there was some dispute between the president and the board members. The president was the wife of the president of the bank that owns the building.

I believe the World was owned at one time by Roy Metcalf. He aso owned The Times Theatre in Cedar Rapids and also owned the Evans Theatre in Anamosa Iowa

See notes about Roy Metcalfe and Fountainbleau Cinemas under the Times theater listing for Cedar Rapids. His Times theater and World theaters both featured electric pump waterfalls in the lobbies.

Here is an October 1977 ad from the Cedar Rapids Gazette:
http://tinyurl.com/lkskhj

The Strand was the project that was the subject of this item from the January 9, 1915, issue of Construction News:

The World Theatre was mentioned as one of his works in the obituary of William Jay Brown in the Feb. 5, 1970, edition of The Cedar Rapids Gazette.

The 1927 FDY lists the Strand Theatre as one of four Cedar Rapids houses operated by Paramount-Publix affiliate A. H. Blank. The other three were the Isis, the Rialto, and the Palace.