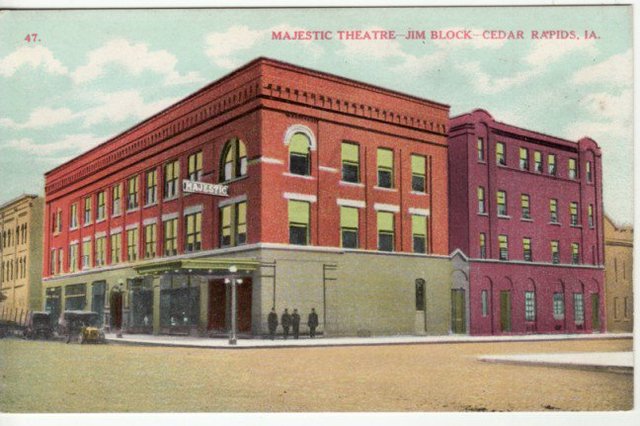 The Majestic Theatre opened in 1908. The manager was Victor Hugo (real name Victor Klassens). The auditorium was added to an existing building which housed the lobby. The Majestic Theatre was the first to be designed by architectural firm Rapp and Rapp of Chicago.

The auditorium seated 1,400 originally. It was the premier vaudeville house in town. In 1914 the roof collapsed over the stage house, demolishing the proscenium and opera boxes. The theatre was rebuilt and reopened, four new brass light fixtures lit the proscenium with its' new mural.

In 1921 the theatre added movies, but vaudeville was still the main event. Special acts, such Sousa and His Band were often booked for one night engagements. When this happened the regular stage show would move to the Isis theatre for the night. When the Iowa Theatre opened, the Orpheum vaudeville shows moved to the new theatre. When the Capitol Theatre (Paramount) opened, the management at the Majestic Theatre reorganized and brought in various theatre groups to run the theatre as a legitimate house.

When the Trousdale Players left in March of 1929 the theatre closed. The owners tried different formats, but by 1930 the theatre had closed, a victim of the depression, the death of vaudeville, competition from the new theatres, and the lack of air conditioning - which forced them to close during the summers. In 1934 the theatre burned in a suspicious blaze (the owner was bankrupt and heavily in debt).

Jean, The Linn County historical society would probably love to have those, they do have an extensive collection of local theatre items. Their web site is http://www.historycenter.org/

Or you could sell it. Some bits of theatrical memorabilia can be quite valuable. If any of the letters are from people whose names would be recognized by theatre buffs today, or if the photos are of historically significant actors (especially if the photos are hand autographed), a good sized collection could be worth quite a bit. Donating it to an institution is nice, but if you do that, be sure to get an appraisal of its value so you can deduct the donation from your income tax.

If you sell it, the collection will most likely end up being donated to an institution eventually anyway, as that’s what most serious collectors of memorabilia do. For example, look at this long list of performing arts memorabilia collections now in the possession of the Library of Congress, many of them assembled by collectors over many years from disparate sources such as Ms. Devereaux’s scrapbook.

LARRY COMER in Song and Jest
MAY and HILL Clever Couple

Ken MC do you have any more information on this theatre?

The Majestic Theatre in Cedar Rapids opened on September 28, 1908. The theatre was indeed designed by Rapp & Rapp.

An article from the May 2, 1908 edition of the Cedar Rapids Evening Gazette states the following…“The theater was designed by Messrs. C.W. and Geo. L. Rapp, who make a specialty of theater architecture, and who have charge of remodeling and the construction of new theaters for the Western Vaudeville Managers association. They are among the best theater architects in the country.”

The theatre roof over the stage collapsed on July 6, 1915 when one of the stay rods which helped support the truss dircectly above the stage snapped. The theatre was repaired and opened again on October 28, 1915.

Besides the Majestic/Shubert/LaSalle Bank Theatre in Chicago this is the earliest known Rapp and Rapp. However from the article it appears there must be more for them to be known as “among the best theater architects in the country.”

I took down my web site. I’m looking at either putting my info on the website for the local ATOS chapter or starting a blog.

Former vaudeville orchestra member Joe Stoddard recalled the night 6,000 gallons of water flooded the orchestra pit at the Majestic Theatre on Third Street NE. Stoddard said the flood occurred when a canvas tank used in a vaudeville diving act collapsed on the stage. Stoddard, who played in the pit orchestra at the Strand and Majestic Theatres in the early days of vaudeville and silent movies, said he earned $45 a week as a drummer in an eight-piece band. Stoddard recalled playing for such vaudeville greats as Buster Keaton, Jack Benny, Bob Hope, George Burns and Gracie Allen. The Majestic was Cedar Rapids premiere vaudeville house in the 1920s until it fell on hard times during the Depression. The theater eventually went bankrupt and was destroyed by a suspicious fire in 1934.

Stoddard said theater goers in Cedar Rapids had a reputation among theatrical folks as being the coldest audience in the Midwest. At one point a sign was reportedly posted backstage in the New York City MajesticTheatre which read, “You think you’re good? Try playing Cedar Rapids!” Reinforcing that reputation was a sign posted backstage at the Cedar Rapids Majestic reading: “Don’t send out your laundry until we’ve seen your act!”

Aug. 30, 1923: Harry Houdini brought his magic act to the Majestic Theatre as part of the theatre ’s vaudeville line up. At the time of his appearance, the magician had been holding audiences spellbound for over a quarter of a century. Four thousand pounds of baggage and equipment for tricks accompanied Houdini. Houdini’s spellbinding performance included his famous India needle trick. In this novel act, the magician swallowed four packages of needles and several yards of silk thread. He then proceeded to pull the thread and needles from his mouth with each needle threaded. Houdini also performed his death-defying Chinese water torture trick. In the stunt, the magician is bound and chained by his ankles then suspended upside down in a clear glass aquarium filled with water. He then races against time to free himself from his ropes and shackles. Gazette August 26, 1998