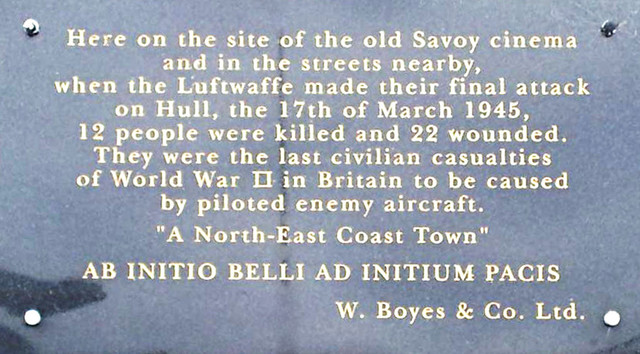 The Savoy Picture Theatre opened 29th October 1923 with Thomas Meighan in “Manslaughter”. It was designed by architectural firm Blackmore & Sykes with seating provided for 1,600: with 950 in the stalls & 650 in the circle. It was equipped with a large organ and the projection box was located at the rear of the stalls. It was equipped with a Western Electric(WE) sound system opening with Al Jolson in “The Singing Fool” on 19th August 1929. It was remodelled in a Streamline Moderne style, reopening on 1st November 1937 with Greta Garbo in “Camille”. A new Hammond organ was installed. The seating capacity was reduced to to 1,400: with 885 in the stalls & 515 in the circle. The screen measured 37½ ft by 15½ ft. Proscenium width 40 ft. Stage 6 ft deep. Two dressing-rooms.

12 people, many leaving the cinema after a film, were killed and 22 wounded on 17th March 1945 when a German Heinkel 111 opened fire with machine guns as it flew across the City.

The Savoy Picture Theatre was closed 10th July 1960 and was later demolished. In 2015 a Boyes store is on the site, with a plaque to the victims of the tragedy.