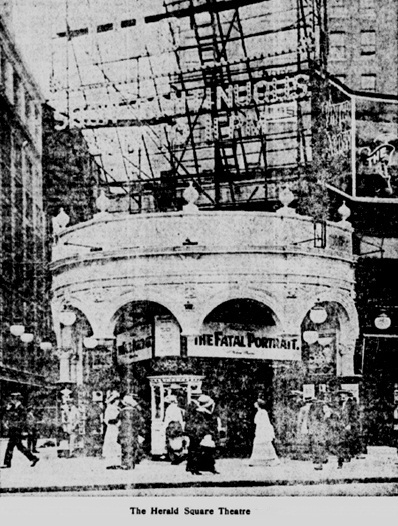 Built in 1883 at the corner of Broadway and 35th Street as the New Park Theatre, where the New York Aquarium formerly stood. It was designed by architect John Sexton. The New Park Theatre was almost entirely rebuilt eleven years later for actor/producer Charles Evans, who had it renamed the Herald Square Theatre, opening with the American premiere of George Bernard Shaw’s “Arms and the Man” in 1894.

The Herald Square Theatre was not notable for its appearance, which both inside and out was rather plain and unadorned compared to later Broadway houses, though Evans did have a graceful red marble colonnade erected along the Broadway facade, while the remainder of the exterior was in tan brick in the Italianate style. Its signage was also fairly simple, consisting of a large rooftop sign, and an inscribed sign under the cornice.

However, the theatre was notable for several other things: it was the first New York theatre leased by the Shuberts (starting in 1900), it was the theatre at which stage legend Helen Hayes made her Broadway debut, at age nine, in 1909 (a year after the Herald Square was gutted by a blaze and rebuilt as a smaller house), and it was the first legitimate Broadway theatre to be converted into a movie house, in 1912, under Marcus Loew. However, its career as a movie theatre was quite brief, since the Herald Square Theatre was closed in 1914 and afterwards demolished to make way for an office building.

According to the book THE TRANSFORMATION OF CINEMA (Eileen Bowser) this started showing movies as Loew’s Herald Square on October 20, 1913 with a program of five reels and evening admission of fifty cents.

Another old picture of the Herald Square: View link

The May 19, 1883, issue of The American Architect and Building News said that a theater to be built at the northeast corner of Broadway and 35th Street was being designed by architect John Sexton.

The Internet Broadway Database page for this theater says that it was designed by the architectural firm of Rose & Stone. This was the 1894 remodeling project, as noted in the June 16, 1894, issue of Real Estate Record and Builders Guide.

The original building as designed by Sexton was a single storey. In 1908, the building suffered a fire which led to the removal of the second floor added by Rose & Stone in 1894.

I have a question about when the Herald Square Theater started. I bought at auction a souvenir clock that was given at the production of “The French Maid” Dec 20 TH in 1837. It was a Rice’s Production. Can you tell me anything about this?

Ron: 1837 in your comment must be a typo. The Internet Broadway Database says that The French Maid, by Edward E. Rice, opened at the Herald Square Theatre in September, 1897. The length of the run is unknown, but perhaps the date on your clock indicates the closing of the play, an event that was sometimes observed by a ceremony of some sort. It might also commemorate the 100th performance of the play. If it opened in September and had eight or nine performances a week (six evening and two or three matinees) then December 20 would be about right for the 100th performance.

The theater itself was opened in 1883 as the New Park Theatre and was remodeled and reopened as the Herald Square Theatre in 1894.

Both have marquees that read “Lew Fields Herald Square Theatre”. So it must have changed ownership or management at that time.

Acording to Mary C. Henderson’s book “The City and the Theatre” when the Shubert Bros. were leasing the theatre in 1908, they changed the policy to vaudeville and installed comedian Lew Fields as its main attraction.

Ah, thanks for the clarification.