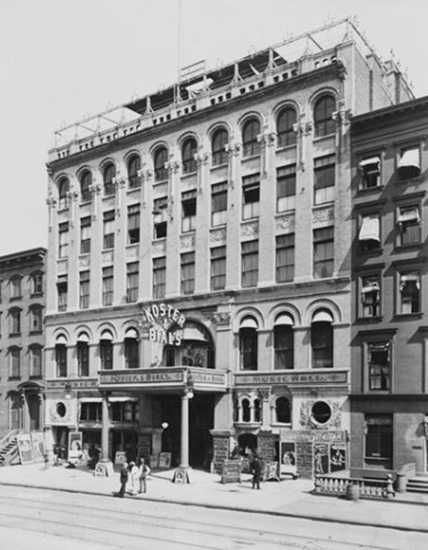 The Manhattan Opera House, operated by Oscar Hammerstein, opened on November 14, 1892. In less than a year, Hammerstein acknowledged the failure of his scheme to house high class opera at the site and ceded management of the facility to John Koster and Albert Bial. The long-time operators of a music hall/beer garden at W. 23rd Street and 6th Avenue, the experienced managers brought their tried-and-true formula of variety acts and alcoholic beverages to the re-christened Koster and Bial’s Music Hall on August 28, 1893, two days after the closing of their previous location.

The theatre featured, for those willing to spend $1.50, 700 upholstered, reserved orchestra seats on the floor, with shelves on the back of every other chair for retention of alcoholic beverages. The balcony level, reached by marble stairs from the foyer, was home to 16 exclusive boxes. The third level was a promenade featuring tables and chairs, capable of accommodating 800, where refreshments were served. These accommodations were accompanied by electric lights, two exhaust fans, and curtains, upholstery, and draperies of blue satin and silk.

On April 23, 1896, the theatre was adorned with a 20x12 foot white screen and, in the center of the balcony, a small booth covered with blue velvet and containing twin machines with turrets. Within this booth sat Thomas Armat. According to the next day’s New York Times, “an unusually bright light fell upon the screen. Then came into view two precious blonde young persons of the variety stage, in pink and blue dresses, doing the umbrella dance with commendable celerity. Their motions were all clearly defined. When they vanished, a view of an angry surf breaking on a sandy beach near a stone pier amazed the spectators. The waves tumbled in furiously and the foam of the breakers flew high in the air. So enthusiastic was the appreciation of the crowd long before this extraordinary exhibition was finished that vociferous cheering was heard”. For the first time in the United States and owing to Edison’s Vitascope, projected motion pictures had been exhibited for commercial purposes

Fifty-two years later, on September 30, 1948, the first “projectionist”, Thomas Armat, who also happened to be the actual inventor of the Wizard of Menlo Park’s machine, died in his Washington, D.C. home. The hall in which Mr. Armat’s creation was first used for financial gain was not quite as long lived as the inventor. On July 21, 1901, after numerous changes of management and nearly a decade of failed attempts to attract regular crowds, the facility was closed with the audience participating in a rendition of “Auld Lang Syne”. Shortly thereafter, the theatre was torn down to make way for the new home of R.H. Macy & Co. That edifice proved to be a bit more resilient, as did the art form first introduced to America on the site in 1896.

A plaque in Herald Square commemorates the Music Hall and the introduction of Edison’s invention.

Although short-lived, it was a famous Vaude theatre in its day. Early film shorts proved very popular at vaudeville houses like this. Bravo to Damien Farley for profiling here what is now a long-forgotten theatre.

Oscar Hammerstein(I) did not fail running the Manhattan Opera House.
After 4 years, the Metropolitan Opera House offered Hammerstein
1.2 million dollars not to produce operas for 10 years. He accepted this and went on to other things, eventually selling the theatre.

The Manhattan Opera House to which ERD refers opened in 1904 and was a different theatre. Hammerstein’s first MOH is the theatre to which the text refers.

Mr. Farley is correct The theatre I mentioned in the above post was located at 311 West 34th Street.

Koster & Bial’s is mentioned in the 1897-98 edition of the Julius Cahn Official Theatrical Guide. It says “This is one of the newest and most beautiful places of amusement in the city, and was erected by Oscar Hammerstein, who intended it for English grand opera, only to be, however, converted to its present use, as a thoroughly first-class music hall, after failing in its original intent.” The manager is listed as Albert Bial. The seating capacity is given as 3,748. (But that figure may include standees). Ticket prices were 25 cents to $1.50. The proscenium opening was 42 feet wide x 42 feet high; and the stage was 46 feet deep. The theatre was on the ground floor.

I have 5 programs from this theater all from 1901, any idea of the value?

I have 5 programs from this theater all from 1901, any idea of the value?

The Manhattan Opera House at 311 West 34th Street mentioned in the previous 2005 posts was showing German War Films in 1915 and is still standing today.