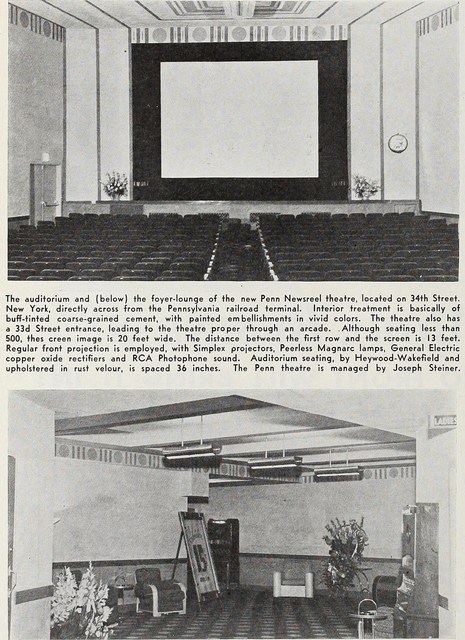 I never knew of this cinema’s existence until yesterday, when I happened on a few old newspaper clippings in a file at the Lincoln Center Performing Arts Library. Catering to the many thousands who passed through nearby Pennsylvania Station every day, the Penn Newsreel Theatre occupied the ground floor of a two-story building that extended from W. 34th Street to W. 35th Street.

Designed by the architectural firm of Roche & Roche, it first opened on September 7, 1938, presenting hourly programs of newsreels and short subjects from 9AM to midnight. Checking facilities were provided for train travelers' luggage and shoppers' packages. In the lobby, poster cases displayed schedules for all trains serving Pennsylvania Station, including the Long Island Rail Road.

A month after opening, labor problems erupted with the stage hands' union, which wanted the theatre’s management to hire two of its members, at a weekly salary of $68 each. When the union set up a picket line in front of the theatre, management countered with a spokesman costumed as William Penn, who told passers-by that the theatre was too small to require stage hands and that they would only be changing lightbulbs, a job presently done by the janitors. The Penn Newsreel Theatre was closed in January 1939 after only four months operation. I’ve not been able to find a listing for it in my collection of Film Daily Year Books.

This site has a few other trainâ€"station newsreel and short-subject theatres listed:

A Boxoffice Magazine item of June 24, 1939, contains the terse line “The Penn Newsreel on 34th St. has been demolished.” I wonder if the building itself was knocked down, or if it was merely gutted and converted to some other use? It sounds from the description in the Times that the part of the theater on 35th Street at least had been newly built. It seems unlikely that a new building would have been destroyed unless the site was wanted by a developer for a much larger building.

Opened September 7, 1938 to a press screening featuring Paramount and Hearst with shorter clips from Pathé, Universal, and Fox. Cardinal Hayes' death led the news. The Penn Newsreel opened to the public a day later on September 8, 1939 at 15 cents before 1p and 25 cents thereafter. The $150,000 Penn Newsreel began a ten-year lease with a projected nut to break even at around $2,500 to $2,800. That proved to be challenging.

Picketing in late October likely hurt box office prospects. Given that the Penn changed policies abruptly in January of 1939 to a repertory cinema house, it would not be unusual that payments to the newsreel providers weren’t timely or to the distributor’s goals.

Just two weeks later, the theatre was shuttered that same January just after four-plus months of operation. More payment issues seem to appear as mechanics' liens against the theatre operators appear in court records beginning in late December and continue on January 26, 1939 and also in February of 1939 prior to the entire operation being demo’d.