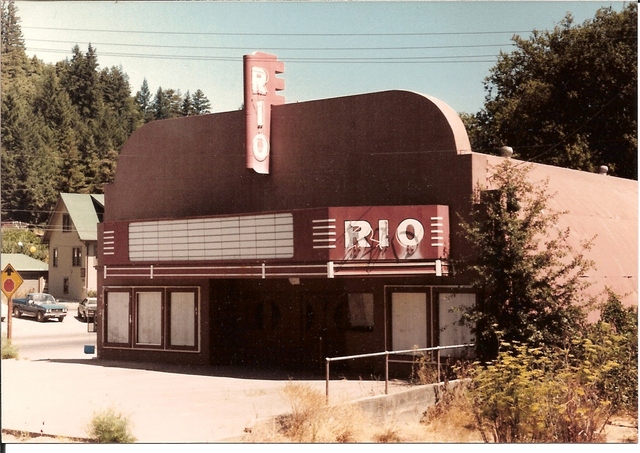 This theater was built in 1950 with a World War II surplus Quonset hut. It has been in operation since 1950 and the inside auditorium ceiling is draped with the largest piece of Cristo’s Running Fence in existence. The walls (inside and out) are decorated with hand painted murals from local resident artists. It is definitely a one of a kind theater with a mom and pop atmosphere.

Contributed by Suzi and Don Schaffert
Get Movie Tickets & Showtimes

Here’s a link to a photo of the theater taking in the summer of 2003:

I can’t help but think of a clothing store that my mother used to patronize in South Jersey called the Ideal – Their slogan was “It’s more than a quonset hut!”, but it really wasn’t. There were quite a few quonset huts still existing in New Jersey in the 1960’s, but I think they are all gone now.

Here is another photo:
http://tinyurl.com/jrf96

The July 9, 1949, issue of Boxoffice magazine published an item saying that the Rio Theatre in Monte Rio had recently opened. Owners of the 500 seat independent house were S.A. Bartlett and S.A. Bartlett Jr., formerly operators of a theater in Grass Valley.

Here is a marquee photo:
http://tinyurl.com/yc7dyz3

Google Maps is way off on this theater’s location. Searching at Google Maps' own web site, the address 20396 Church Street fetches the correct location. That’s the address Google will have to be sent, even though the theater itself lists Bohemian Highway as the name of its street. I managed to find the Street View of the theater and update it, but it was a really long drive, at the corner of D Street a mile or more north of the location of the pin on the map.

I’ve just realized that if you use the pavement arrow in Street View to move two clicks left, a thumbnail photo will appear, and if you click that thumbnail it will display the photo, plus thumbnails for more than a dozen additional photos of Monte Rio, including several more depicting the theater. The photos include links to their sources, which look better and can often be further enlarged.

Only 6 days to save this movie theater. Pledge today! Save the Rio! http://www.savetherio.com

From helicopter or drone TV coverage of the Russian River flood that I saw this evening on local (SF) news this theatre appears to be inundated.