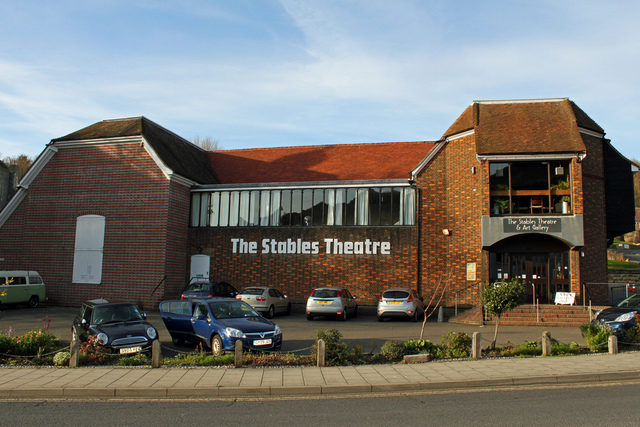 The building that now houses the Stables Theatre & Art Gallery in Hastings Old Town, was built as stables for the former Hastings MP John Collier in the 18th century and were later owned by two times Prime Minister and Rye MP, Sir Arthur Wellesley (Duke of Wellington), who resided at Old Hastings House at the top of the High Street, which is now a charity run old peoples home.

By the mid-20th century the stables had been abandoned and had fallen into a serious state of disrepair.

It was salvaged by a local theatre group who set about transforming the old stables into a theatre. Sir Ralph Richardson officially opened the Stables Theatre in June 1959, which in those days had a capacity of 180 over two tiers.

In 1975, a £65,000 extension appeal was launched and two years later work started on constructing a brand new entrance on The Bourne, which would include a new bar and Art Gallery. Thus was completed in 1978.

Art house, up market mainstream and classic movies started to be presented here once every six weeks and these ran from the mid-1980’s until 1993.

As a theatre, the Stables Theatre continues to be a success and in recent years the seating capacity has been reduced to 126, which was achieved when the stalls were built up to the balcony at the same rake, which affords everyone a decent view.