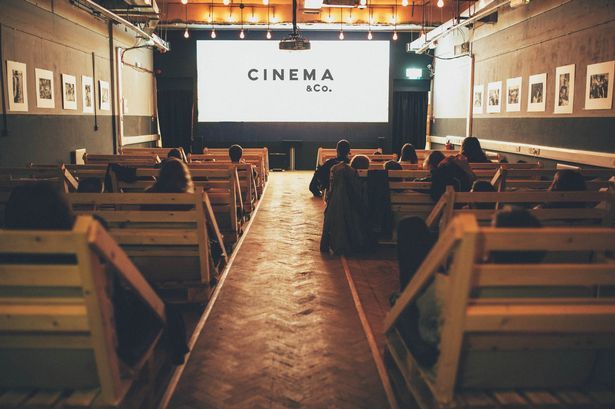 The cinema’s name comes from the fact that it was created by three friends, led by Fred Tennant, who took a year out from his fine arts course at Central St. Martin in London to launch the cinema. They wanted to set up a cinema that shows films that usually don’t make it to the multiplexes. They also wanted to create a new social experience, where watching films provides an opportunity to meet fellow film fans. Classic films feature heavily in their programme, while they also provide a showcase for works by new filmmakers.

Patrons sit on unique two-seater sofas that the cinema founders designed and made themselves from shipping pallets and cushions. These are on wheels, so they can be moved to one side.

There is a bar selling food, wine and award-winning Welsh beers from local breweries.

The venue is available for hire for weddings and private parties.

Cinema & Co hit the headlines in December 2021 when Swansea Council bolted the shutters after the owner, Anna Redfern, was summoned to court for allegedly defying a previous order to close. The cinema had initially been ordered to close by Swansea Council and Welsh Government officials on 19th November for alleged COVID-19 rule breaches. The venue had said it would not enforce the COVID-19 pass scheme and would “take a stand” against new measures applying to cinemas and similar venues, calling them “discriminatory and unlawful”.

The venue had been issued with a closure order and told to shut for 28 days. But it chose to re-open. Anna Redfern was taken to court on 30th November, where Judge Thomas rejected her appeal to dismiss her case - and ordered the venue to follow COVID-19 regulations, effectively meaning it had to close its doors, as per the council’s original order.

Ms Redfern was also told to pay the council’s legal costs of £5,265. But the day after the court case, Cinema and Co. apparently re-opened and hosted a Christmas film screening for people who had booked a ticket online. In response, Swansea Council confirmed a ‘contempt of court’ application will be made, alleging the business has failed to comply with its recent court order. The shutters were then bolted to the ground to prevent any further attempts to re-open.

The shutters had been bolted closed on 11th December. On Tuesday 14th December Ms Redfern was summoned to Swansea Magistrates' Court.

She admitted to District Judge Neale Thomas that she had been in contempt of court and also accepted two counts of failing to comply with the Coronavirus Act 2020. Defence solicitor Jonathan Gwyn Mendus Edwards asked the court to be lenient with his client, but Judge Thomas said it was clear that Ms Redfern had broken the law.

The judge did say that Ms Redfern was of previous good character and had worked hard to establish her business.