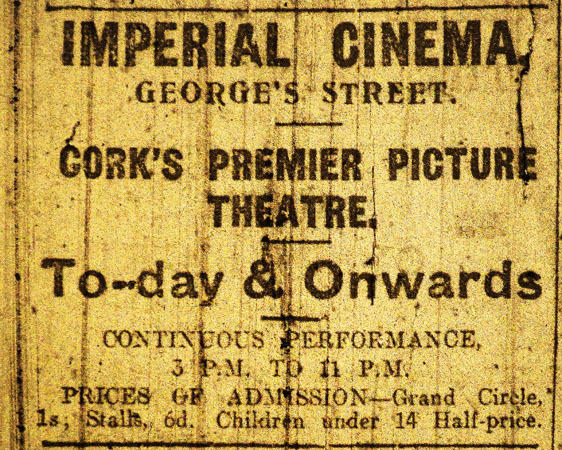 The Imperial Cinema was situated on George’s Street, now Oliver Plunkett Street and opened on 7th February 1913. The site of the cinema was previously occupied by Munster Co-operative Stores. While the Imperial Cinema was initially set up as a temporary cinema it stayed for over 40 years. For Corkonians the cinema’s name didn’t really stick and it became informally known as Miah’s, after the cinema’s commissionaire who was an ever-present personality. The Imperial Cinema had a balcony with more expensive seats and a lower tier of benches. The last film, a western “Montana Territory”, was shown on 3rd July 1954. Failure to modernise over the years more or less led to the cinema’s decline. The premises was later occupied by the Hanover Motorcycle Company but today the building houses the Saville menswear shop with staff seemingly unaware of the property’s past.