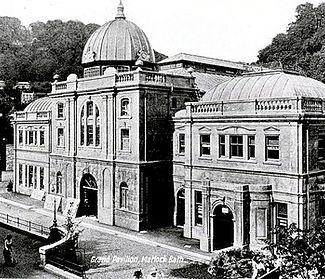 Located in the Victorian pleasure resort of Matlock Bath, Derbyshire on the banks of the River Derwent. The Grand Pavilion was built in 1910 by the Urban District Council and contained a theatre, a large room on the ground floor and a pump room. It was screening films from its early days. The proscenium was 23ft wide, the stage 37ft deep and there were five dressing rooms.

In 1916 it was used for cinema and variety stage use. By 1925 it was screening films nightly, with two shows on Saturdays. By 1935 it had been equipped with a Morrison sound system and occasional variety shows were still part of the film programmes. In June 1936 it was leased to Matlock Cinemas and films continued until 1939.

It went over to general entertainment use and in the 1990’s it becamed a music venue and then a nightclub. Since 2012 it has been owned by the local community and resoration work is ongoing. One section of the building now houses the Peak District Lead Mining Museum.