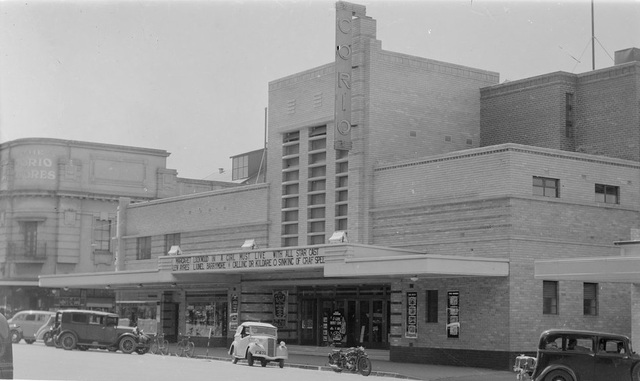 Corio Theatre opened on 19th February 1938. The mayor of Geelong (Alderman C.N. Brown) performed the opening ceremony. The structure was erected on a section of Market-Square land, with a frontage on Little Malop Street. The architect for the building was Charles Neville Holinshed of Collins Street, Melbourne. Construction was by Master Builders Hansen & Yuncken P/L of Little Collins Street, Melbourne.

The auditorium had a capacity for 780-seats in the stalls, and 460-seats in the circle. The general treatment of the building lends to an Art Deco style, which in the auditorium has recessed vertical planes, while the ceiling was tastefully decorated with harmonizing colours. The general seating was made of soft rubber cushions, while the lounge section of the circle had comfortable arm rests provided for each seat. The building was equipped with the latest industrial air conditioning unit and there was a crying room built adjacent to the stalls entrance.