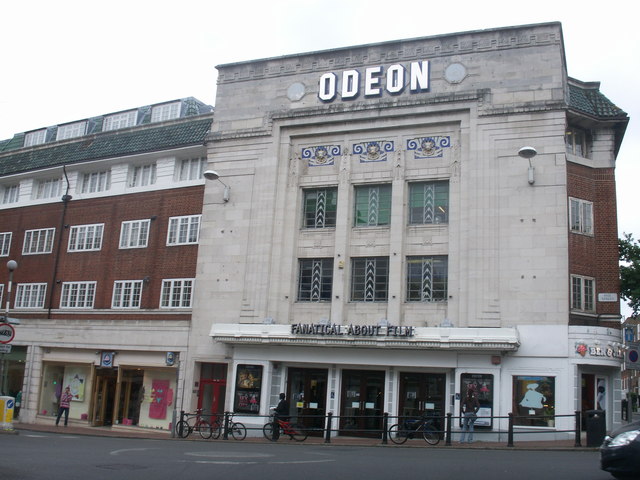 Located in Richmond upon Thames, Surrey, towards the west of what is today included in Greater London. The Richmond Kinema opened on 21st April 1930. It was built for the Joseph Mears Theatres Theatres Ltd. circuit. It had an original seating capacity of 1,533 in stalls and circle levels. It was re-named Premier Cinema from 29th June 1940 (this was to enable the removal of the Richmond name on the cinema, in case German parachutists landed nearby).

It was taken over by Oscar Deutsch’s Odeon Theatres Ltd. from 3rd January 1944 and was re-named Odeon in May 1944. Converted into a triple screen from 30th December 1972. Screen 1 in the old circle is beautiful. It retains the original Atmospheric style auditorium, modelled in the style of a 17th century Spanish courtyard. Features include ornate grillwork, Spanish tiles, Moorish windows, even stone and plaster oranges and doves. Screens 2 & 3 are located under the circle and both have seating provided for 118. The entrance foyer plasterwork depicts all the various trades of the people the original owner (Joseph T. Mears) employed, lots of them.

This theatre originally opened in 1930 with 1533 seats and the architects were Julian Leathert and W.Granger.
atmos.

The auditorium of the Odeon Richmond can be seen in the British film “The Smallest Show on Earth” (1957) starring Virgina McKenna, Bill Travers, Margaret Rutherford & Peter Sellers.

In the film, the young couple who have inherited a closed down ‘flea-pit’ cinema go to the local movie palace to see how things should be run. The exterior of the ‘Grand’ is actually the exterior of the Gaumont Palace, Hammersmith in West London (later known as the Odeon) and today in live theatre use as the Apollo, Hammersmith. On the display boards outside, the movies playing that week were Danny Kaye “Knock on Wood” and Stephen Murray “Guilty?”.

When inside the ‘Grand’ (filmed in the Odeon Richmond, which is located just outside London on the Western side), the couple are seated in the circle and there are good views of the stage area, plus you see the Compton organ rising from the orchestra pit.

The exterior of the ‘flea-pit’ Bijou cinema in the film is actually a mock facade that was set up between two railway bridges in Kilburn, North London (the site still remains today. The interior of the Bijou was studio set

and an interior on the same day
View link

….please, nobody mention the appauling building around the corner!!! (the Odeon Multiplex) Dreadful!

I saw the Odeon Richmond a few days ago from the window of an aircraft landing at Heathrow. Its quit a sight to see the huge auditorium so detached from the main foyer building. Maybe someone on here us able to put up the Google map of it?

Sorry! I forgot, you can see already on the map link above.

Two more photos of the Odeon taken in March 2009.

I just returned from a visit to England. During a trip to Richmond, I happily stumbled upon this wonderful facade. Walking up from the historic Richmond Bridge that traverses the Thames, the theater really dominates the streetscape and provides a terrific, and very well preserved, landmark on its own. I just wish I could have caught a film here – but time was not on my side. (And the Fanatical About Films sign was also terrific to see.)

I worked at the Odeon Richmond in the early 1960’s. For those interested the cinema had in those days Kalee 21 projectors with President carbon arc lamps. Duophonic sound equipment including stereo magnetic sound. There was a slide projector which doubled as a follow spot. 4 dressing room s 2 each side of the stage. One used for usherettes to change in. The Holophane lighting system had been removed by the 1960’s although atmospheric decorative lighting was still used in the auditorium. The organ had been removed although the lift was still in the orchestra pit. A Brenell tape recorder supplied background music to the circle foyer. We could show CinemaScope, Academy ratio and also had a special aperture plate and lens for VistaVision (which I saw used once!). The week before the film “The Great Escape” we had an escapology act on the stage before the trailers. Only time I saw the stage used. 5 projection staff. Manager in Evening Dress (Tuxedo jacket), Doorman, Chief of staff, ushers, boiler man, and even a uniformed car park attendant. All good fun back then.