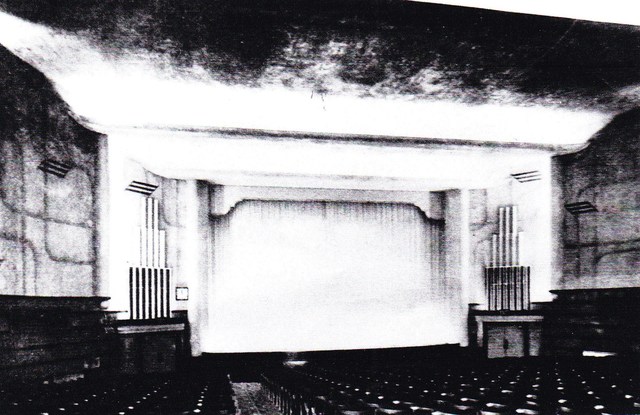 This Art Deco style building has two very attractive bass relief panels on the façade over the entrance. Located close to town centre at the corner of Raby Road and York Road, it was built for independent operators, opening on 27th July 1936 as the Majestic Cinema. It was equipped with a British Thomson-Houston(BTH) sound system. On 22ndNovember 1943 it was taken over by the Oscar Deutsch chain of Odeon Theatres Ltd. On 2nd April 1945 it was re-named Odeon. It was closed by the Rank Organisation as the Odeon Cinema on 24th October 1981.

It was converted into a bingo club. From the mid-1990’s it became Ceasar’s Palace nightclub and Jo Pools bars and they were closed in around 2002. The building remains, closed and un-used in 2021.

In 1992 the Odeon was designated a Grade II Listed building by English Heritage.

Still no sign of any physical progress on the Odeon, 28 and a half years after showing its last film. It appears that Hartlepool Borough Council may be looking at a compulsory purchase order on the building as it is ‘high priority’ on its list of ‘grot spots’. If the council do buy the building, it will be interesting to see how they will spend the council taxpayers money on it. Refurbish/demolish/convert ???

Hartlepool Borough Council are looking at compulsory purchase as the current owners are not carrying out any remedial work on the building to improve its appearance. It is a high priority on Mayor Drummonds ‘Grot Spot’ list. The council have already ensured several buildings have either been redeveloped or demolished and the Odeon is probably one of the worst offenders left. It looks highly likely they will then consider de-listing and demolition. As only the stone front images are listed, these could be removed and allow the bulldozers in. Most of the interior was altered / damaged when converted to Caesars Palace in the early 90’s so little probably remains apart from ceiling areas in the foyer which aare hidden above suspended ceilings. The council are eager to deal with the Odeon as it is in a prominent position close to the town centre and with Hartlepool being a ‘Tall Ships 2010’ host port, they are expecting around a million visitors. This is certainly one building in the town they do not want to be seen. With pigeons having access via the side windows since 1981, these areas of the building must be ripe, as they were not used even when it re-opened some 15 or so years ago. Hopefully some recording of its features both inside or out will be carried out if it is in fact demolished. Its certain there is little hope of it being brought back into a useful role, having almost gone through 3 decades since it was in full use. Another of Hartlepools prominent buildings left to rot. With the Wesley Chapel (former Wesley Nightclub) out of use again, it wont be long before that bacomes an eyesore yet again.

I took some photographs of the Odeon today and it’s still in a very sorry state. A friend of mine recently commented that when Caesars Palace was open there was three inches of pigeon excrement on the window ledge of the kitchen where food was being prepared. How did the health department not notice it?

Recently, an engineer from Hartlepool Borough Council has visited the Odeon to carry out an external inspection following reports that part of a wall was showing signs of bulging and loose bricks. Whilst no action has been taken to date, the owners have been advised. The building is still a priority on the council ‘grot-spot’ list of buildings, however problems on agreeing a price have so far put off any offers to redevelop the site. Over 28 years since it ended its cinema life, its deterioration is becoming more evident.

The footpath along the facade of the Odeon has recently been closed off with barriers running the full length of the building and also behind the shops and South west corner (Near fire escape). Further to the post of March 2nd, it appears that some structural problems may be the cause. The exterior walls are showing signs of damp ingress, with mould appearing in various places. Whether the council enforce the owners to carry out remedial repairs will have to be seen.

Hartlepool Borough Council have now boarded off parts of the footpath around the former Odeon building, namely areas at both corners where the large glass tiled windows are located. It has been reported pieces of masonary have been falling, so the council have acted to protect passing members of the public. The owners have been asked to carry out remedial work and find a use for the building. See article below from Hartlepool Mail:
View link

As of August 2011, the building’s future is looking increasingly bleak. The owners have had a responsibility to ensure the future of this once ‘majestic" building but have chosen to ignore that custodianship. I do feel that Hartlepool council has to shoulder at lest part of the blame for the disgraceful state of the building. Enforcement orders on maintenence and repairs have been slow in being issued.This has allowed time for decay to set in.Ovne cannot help but think that a bunch of five yerar olds could have done a better job of ensuring the future of this leviathon for future generations…….

My apologies for one or two typing errors there….

Hartlepool Council have started emergency repair works to the Odeon, with the Young Street elevation of the building now covered in scaffolding. The council have been forced to act after the owners carried out inadequate work following falling masonry from the windows at top level and the curved windows on the corner of the building. The repairs are expected to cost in the region of £20,000 which the council plans to claim back from its owners. Some of the doorways added to allow fire escape from Joe Pools & Caesars Palace have also been boarded up by the council, as the doors were starting to decay.