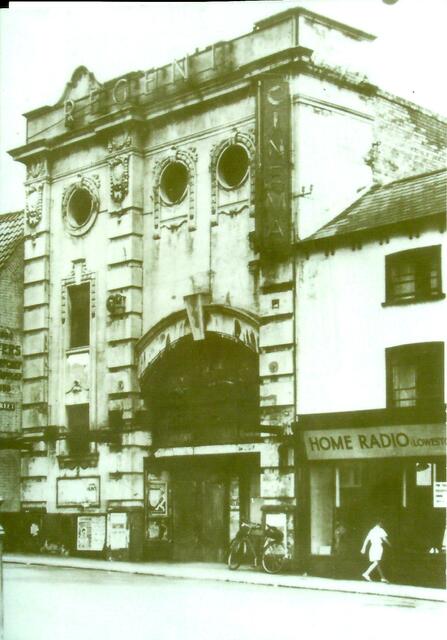 In Lowestoft, Suffolk, on the site of some old cottages, the Cosy Corner Cinema opened on Monday 6th October 1913 with “Wanted”, plus other short comedies and dramas. The Mayor, Councillor F. T. Dewing, officiated. There were 500 seats, in stalls and balcony, and the proscenium was 22ft wide.

The Cosy Corner Cinema Company had opened the cinema. By 1916 it had been acquired by Messrs. Turner and Howard, and by 1921 by Ernest Howard.

It appears to have closed in early-1925, re-opening, after redecoration and refurbishment, on Monday 13th July 1925 with “The Brass Bottle”, starring Harry Myers. Francis Bertram was now the proprietor; two years later, Miss P. J. Urwick took over.

The Cosy Corner Cinema appears to have closed again in 1929. It was acquired by Showall Ltd., of London, Marshall sound was installed and the cinema re-opened, as the Regent Cinema, on Easter Monday, 29th March 1931. The Regent Cinema had 400 seats.

The Regent Cinema closed yet again in early-1936, only to re-open quite quickly, on Easter Monday, 29th March 1936, with “Mutiny on the Bounty”, starring Charles Laughton.

The building was used for storage until being destroyed by fire on 1st September 1960.

The rebuilt building has been home to Tom Watts Ltd, and then a Texas Discount Store. By April 2019 it was occupied by Emperor Chinese restaurant.