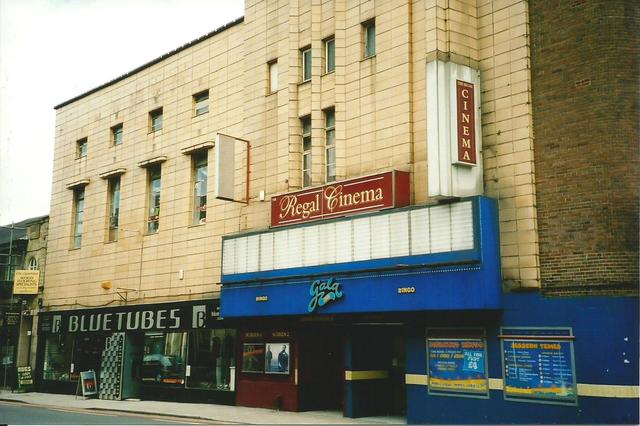 This cinema has had more owners than most, starting of as an original Oscar Deutsch built Odeon in 1936, before passing through Star Cinemas(1971), Cannon, Virgin(1995), ABC(1996) and finally an enterprising independent - Northern Morris Associated Cinemas(2003).

The Odeon was designed by architect W. Calder Robson from the Harry Weedon practice and opened on 7th November with Gary Cooper in “Mr Deeds Goes to Town”. There were 950 stalls and 642 circle seats. The auditorium was very pleasant with a wide proscenium preceded by a metal fret-work feature which ran up the side walls and across the ceiling. Lighting was indirect from plaster troughs across the ceiling and around the proscenium arch. The circle had extended arms providing emergency exits from the screen end of the cinema at the balcony level.

The exterior was less successful with an elegant ‘Odeon’ style facade to King Street but some very unflattering views of the bulky auditorium from every other side! A tall slender faiance tiled fin with the Odeon lettering prominent at the top, and a row of shops were provided in the scheme.

Taken over by the Star Cinemas chain from 3rd January 1971, they divided the building with bingo in the stalls and a twin cinema seating 250 and 246 in the circle. The foyer was split to provided separate entrances to each section. The twin cinemas opened on 12th August 1971 as the Studio 1 & 2 Cinemas.

In 2001 a 6-screen multiplex had been constructed in Church Street. The operator pulled out before its opening, and the new cinemas lay empty, despite Northern Morris, the operator of the Regal Cinemas, expressing an interest in taking it over. However it found an operator when Vue took over, opening on 25th August 2006.

Sadly, when the Vue multiplex opened, Northern Morris reluctantly closed the Regal Cinemas in August 2006, with one of the screens playing Samuel L. Jackson in “Snakes on a Plane”. In February 2007, the Gala Bingo Club in the former stalls area also closed, leaving the building unused and it was put up ‘For Sale’.

The City council planning committee have since given permission for the site to be redeveloped as a 115-bed roomed Travelodge and retail units, to begin a new era for the site.

It was demolished in January 2010.

The cinema was closed as the ABC by Odeon on 1 September 2002 and re-opened by Northern Morris Cinemas Ltd on 17 January 2003 with the films 8 Mile starring rapper Eminem and Gangs Of New York.

The first film shown at the original Odeon cinema of 1936 on 7 November was MR DEEDS GOES TO TOWN. The newly twinned cinema opened on 12 August 1971 with the films SOLDIER BLUE and THE ARISTOCATS.

The Regal Cinemas closed down in August 2006 when the long-delayed opening of the multiplex took place. Bingo continues in the stalls area at present – but for how much longer.

Picture, dating from 1992 when it was the Cannon, here :-
View link

does any one know what is going to happen to this fab cinema. I believe Gala Bingo are now moving out! Is the building going to be knocked down or is there any chance of saving it. I would like to view the cinema before anything happens to it. Does anyone have contact details of the owners?

does any one know what is going to happen to this fab cinema. I believe Gala Bingo are now moving out! Is the building going to be knocked down or is there any chance of saving it. I would like to view the cinema before anything happens to it. Does anyone have contact details of the owners?

Application to demolish is circulating – the council have stated it is an “art deco building, but without merit” and see no reason to retain it.

Another original Odeon soon to go?

The urban explorer group ‘28 Days Later’ managed to gain entry into the closed down building in May 2008, and recorded the following images:
View link

Great images ‘28 Days Later’ I did some projection shifts here when Northern Morris had it, it was a nice cinema to work in. I remember the screens with bottom moveable masking, up for scope, down for wide screen.