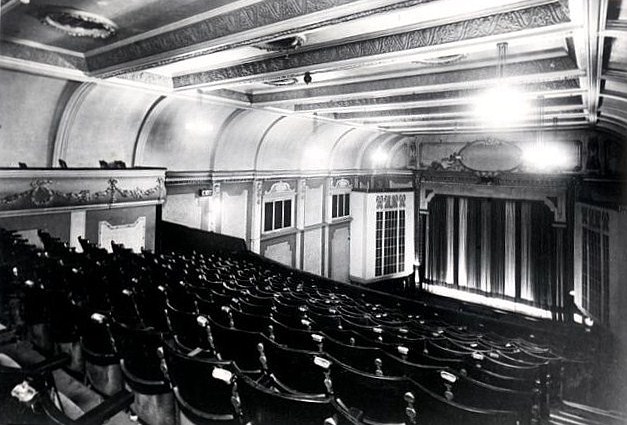 The fine looking building that was once the County Cinema is still extant on Dalton Square at the corner of Friar Street and is now called Palatine Hall (office premises). It was originally built in 1798 as a Roman Catholic chapel, later becoming a concert hall/music hall known as the Hippodrome/Opera House. Films were first screened in 1910. It became the County Cinema in 1921.

It was equipped with a Jardine 2Manual orchestral organ in 1927. Alterations were carried out and a Western Electric(WE) sound system was installed with a reopening on 30th June 1930. (Kinematograph Year Book for 1931 shows bookings being made at the Tivoli Cinema in Blackpool) which was acquired by the Union Circuit in 1936 (though ownership was technically “Hippodrome (Lancaster) Ltd”).

In October 1937 it passed into the ownership of Associated British Cinemas(ABC), though with the same Union/Hippodrome structure (see KYB 1954). ABC owned the Palace Cinema, also on Dalton Square (which has its own page on Cinema Treasures).

The County Cinema closed on 1st December 1956. In 1983 it was converted into office space named Palatine Hall.

On 16th May 1989 it was designated a Grade II Listed building.

The following information and text is from the entry for the Hippodrome, Lancaster in “Curtains!!!” (1982):

“The interior was completely reconstructed in 1931 as a cinema with one balcony and a small stage incorporated within the auditorium. Ashlar front to Dalton Square, which forms the end of a handsome terrace of houses. The side walls show the arched windows of the former chapel/temperance-hall. In 1980/81 the interior was gutted for offices, the façade restored and the arches in the side elevation unblocked and windows inserted.”

My sister Margaret Edwards was the Cinema Manageress here for 4.½ years until her death in 1945.

The County Cinema, Dalton Square, Lancaster was next door to the home of Dr Buck Ruxton who was the perpetrator in a dramatic murder case in the 1930s. He killed and dismembered his wife and maid and dumped their body parts in a river in Scotland.

The case is celebrated as being the first case to secure a conviction by forensically re-constructing the face of the victim and the timing of insect life-cycle.

Both buildings are still intact and in regular use.

There is some confusion on the buildings location caused by the map arrow being incorrect. The County is on the North East corner of the square, the building arrowed is the Dalton Rooms, a former garage but with an exterior that some mistake as a former cinema.