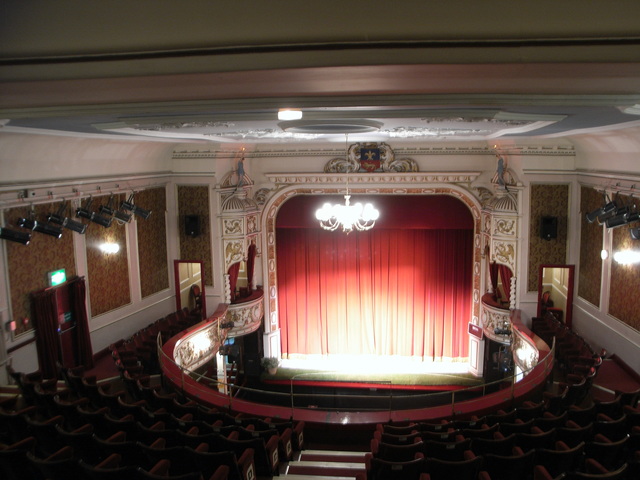 There has been a theatre on this site since 1782 - much altered over the years (including changes by Frank Matcham). In 1908 a fire gutted the building and the interior was completely lost, but architect Albert Winstanley designed a new theatre to fit within the remaining walls and it is this structure which remains, substantially unaltered, today. The exterior is, however, largely that of 1782.

There is a single balcony with the front returned to the stage wall and culminating in a single, very elaborate, box on either side. The proscenium is almost square with rounded corners and, (like the circle front, boxes, and ceiling), has delightful and flamboyant Edwardian plasterwork. The theatre is chronically short of foyer space - the box office is unbelievably tiny and is almost on the street.

It became a cinema (projection box constructed behind the rear of the balcony) and was taken over by Union Cinemas in 1936. Associated British Cinemas(ABC) continued to run the Grand Cinema after taking over Union Cinemas circuit, until they sold it in 1951 to Lancaster Footlights Club. They have run it ever since as a largely amateur theatre but with many small scale professional tours. Films are no longer part of the programme here.

An absolutely charming gem of a building which has probably survived because of it’s slightly off centre location in the town.

The Grand Theatre is a Grade II Listed building.