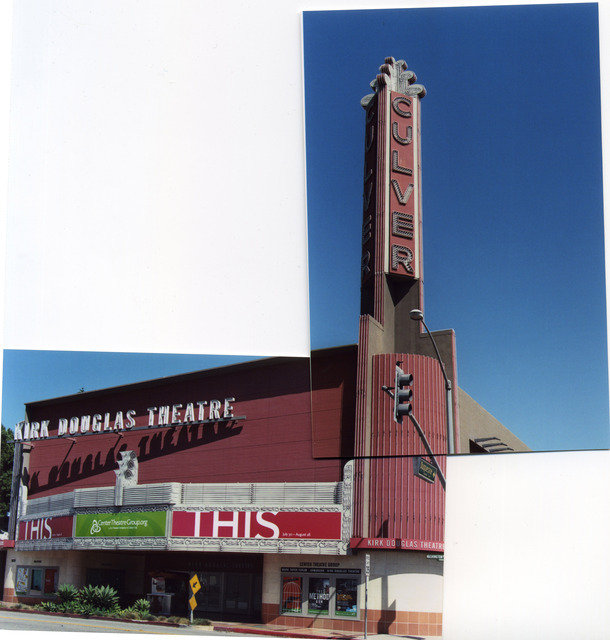 The Culver Theatre opened on August 13, 1946 with a seating capacity of 1,150(on a stadium plan with no overhanging balcony). The Culver Theatre was located near the Columbia Pictures studio lot (then the lot for MGM). It was built for and operated by Fox West Coast Theatres.

Originally, much like surrounding downtown Culver City, the Culver Theatre was a key part of classic Hollywood’s thriving entertainment community. But, eventually, much of the entertainment industry moved to points north and the theatre grew tired and worn over the years. It was tripled on January 14, 1976. It was closed in 1989.

Following severe damage caused by the Northridge easrthquake in 1994, the theatre’s auditorium, which had been triplexed earlier, was gutted as part of an abestos removal project. In 2002 work began to convert the theatre into a live performance space for the Center Theatre Group. It reopened in 2004.

Now renamed the Kirk Douglas Theatre, it operates as a performing arts center and playhouse. An $8 million restoration project, with a $1.25 million grant from the City of Culver, included the addition of two new stages, one with 100 seats and another with 350 seats. Most of the exterior has been preserved, including the box office and the signature mezzanine tile.

With the rebirth of the Culver/Kirk Douglas Theatre, the downtown area will receive its first legitimate theatre and a much needed shot in the arm.

The building is a Designated Historic-Cultural Monument.

New home for the “Culver” script:

Here is a January 1950 ad from the LA Times:
http://tinyurl.com/qzmg5h

This theatre was seen in an episode of Baywatch Nights(season 2 – episode 12, Possessed).

This theatre(then called CulverTheatre) was seen briefly(up the street from the Freeway Angels building) in an episode of Chips(season 6, episode 11 – Day of the robot).