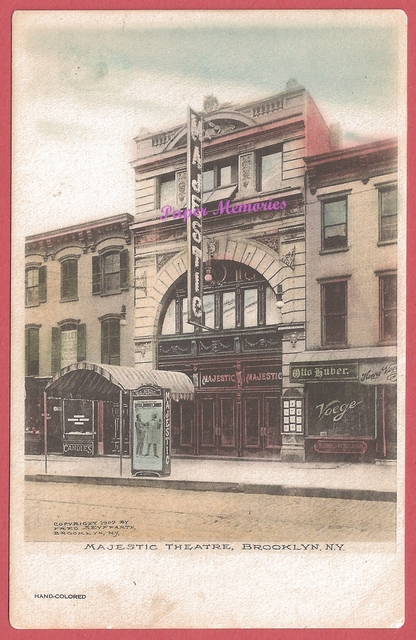 The Majestic Theatre was a 1,708-seat legitimate theatre, later vaudeville house, built in 1904 on Fulton Street near the Orpheum Theatre and adjacent to the Strand Theatre in downtown Brooklyn. Recall the theatre playing triple features in the mid-1950’s similar to the programming at the Savoy Theatre in Jamaica, Queens.

The Majestic Theatre closed around 1968 and sat dormant until 1987, when it was rescued by the nearby Brooklyn Academy of Music and ‘renovated’ in a distressed state. It was then known as the BAM Majestic Theater for a number of years and was used for live performances, and later was known as the BAM Harvey Theater, with a seating capacity of 874.

In June 2013, the Harvey Theatre premiered its new Steinberg screen, for classic and independent movies on a 35 foot x 19 foot screen, with digital projection and 7.1 Dolby Digital sound with 42 surround speakers.

Please forgive my ignorance…but I just finished watching “the Curious Case of Benjamin Button” for the 1st time, in it there is a reference to “The Majestic” in New York City (Cate Blanchett’s character dances there)…the only one in NYC I fuond is THIS one & one that closed int he 20s…is this the one referenced in that movie? Sure looks like it from the pics.

jorgito2001, the New York City Majestic most likely referred to is the one on 44th Street in Manhattan. It never showed movies.

shows a bridge rally that took place in June, 1939 (this was a bridge from Hamilton Avenue to the Battery and eventually became the Brooklyn-Battery Tunnel). Note that on the sidewalk are the columns (supports, stanchions) for the Fulton Avenue El, one of which is going straight through the middle and front of the Majestic’s marquee. The Fulton Avenue El came down in 1940.

In this image: http://brooklynpix.com/photo1/F/ftgreene34.jpg
we see movies on the busy active marquee. Hitler Beast of Berlin was a 1939 movie. We see no El columns at all.

My question is, then:
Were there a marquee on each street the theater face OR was the Aland LAdd flick seen later in time, not 1939? Alan Ladd was not really the star, and the other movie is a renamed 1935 British film. Or is something else involved? It is odd that the marquee is empty in first definitely 1939 image, but ver full in the second image.

Anyone reading this and know?

I saw a play there today. I think it’s fascinating that they left the theatre in this condition. I really like it; you can feel the history.

Interesting photos posted by EdSolero 11/23/07,and the other photos show a great marquee when known as Majestic Theatre.Good to see that is it still in operation.

According to NewYorkCityTheatre.com, this Majestic opened in 1904, as the “Majestic Theatre”. see this link http://www.newyorkcitytheatre.com/theaters/harveylichtensteintheater/history.php

The movie palace is making a return to Brooklyn this summer. The Harvey Theater at the Brooklyn Academy of Music will be home to the Steinberg Screen, a 35-foot-by-19-foot digital projection screen, with 42 accompanying surround-sound speakers. That will make the theater, a centerpiece of live productions and concerts, the largest cinema in Brooklyn able to show both 3-D and conventional films, according to BAM officials, who are to announce the new installation on Thursday.

“It’s going to be huge, because it’s going to fill the proscenium of the Harvey,” Karen Brooks Hopkins, the president of BAM, said. “You’re in a spectacular atmospheric theater, that will now have this giant screen and will be this spectacular atmospheric movie theater. It hearkens back to the great movie palaces of yesteryear, but it will be completely state-of-the-art.”

The screen and accompanying equipment were the gift of Joseph and Diane Steinberg, Brooklyn philanthropists and cinephiles. It will give the theater the ability to show 3-D movies, as well as multimedia works and films with live soundtracks. (The Harvey will continue to showcase theater and other performances; the screen is storable under the stage.) It will also give BAM, whose Rose Cinemas and BAMcinématek already draw 200,000 people a year, the opportunity to screen bigger films in the summer, when the 834-seat Harvey is usually dark. “We hope to show big Hollywood films in August,” Ms. Brooks Hopkins said.

The Steinberg Screen will open to the public on June 19 for the BAMcinemaFest. Coming programming includes a “Big Screen Epics” series including “2001: A Space Odyssey,” Doctor Zhivago” and “The Godfather.”

I’m a BAM employee front-of-house, and just added a few photos I had.

The basics of the renovation — The large box office area (now the “outer lobby”) was originally the (only) lobby. When you take a right and enter the ever larger interior lobby, you are standing at the back of the original orchestra section.

The house is now made up of the old mezzanine and upper balcony, and the stage was bumped out past the proscenium, and raised to meet the old mezzanine. Under the apron of the current stage, you have the old front orchestra. It’s now used for stage trap doors, etc. I believe part of it can be lowered to serve as an orchestra pit.

The original director that brought the first show in for the re-open by BAM was Peter Brook, and the renovation mirrored a project of his in Paris — the crumbling portions of the theatre were pulled down, surviving ornamentation was left. That is, rather than creating a new “fake” skin for the theater, the ruin was stabilized and the ornamentation that survived stayed put. Where there were new walls, they were painted to match the authentic distressed walls.

The technical systems were completely replaced, since it needed to be a working, modern performance space. I believe the roof was completely rebuilt too.

The seating in the orchestra was replaced last year (the original seating was long gone), and two functional sort of right and left boxes were added over top the exit voms.

I’ll try to remember to get some more detailed photos. I’m there all the time.

I was just there yesterday for “The Iceman Cometh”.