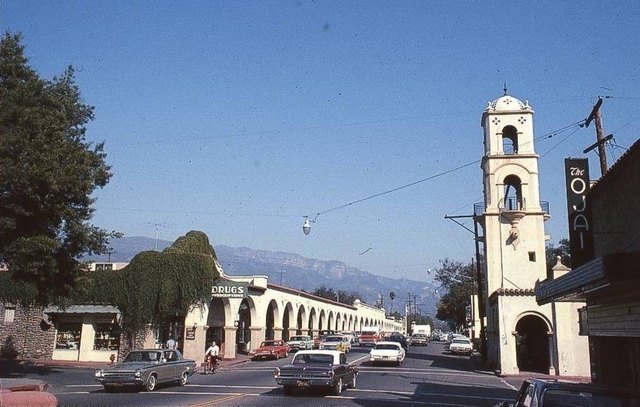 Serving the small community of slightly less than 10,000 people, the Isis Theatre was built by J.J. Burke and opened on August 19, 1914 with Jack London’s “Valley of the Moon”. In the early years the theatre also had vaudeville acts and moved the chairs aside twice a week for dancing.

The theatre was renamed Ojai Theatre in 1926, when it was purchased by Fred & Lidie Hart. Throughout the decades the theatre changed ownership and management several times. It was called Ojai Theatre until Wayne Glasgow took over management and reopened the theatre as the Glasgow Playhouse in 1966. It was remodeled to the plans of architect J. Arthur Drielsma and had a Scottish motif.

Glasgow sold the theatre to Khaled Al-Awar in 1983, who changed the name to Ojai Playhouse.

Mark & Kathy Hartley bought the theatre in 2007 and financed a major renovation of the old building. The Hartley’s have changed the name back to Ojai Theatre, though the marquee still calls it the Ojai Playhouse.

The Ojai Playhouse generally screens first run movies, and has also been the venue for the Ojai Film Society screenings on Sunday afternoons since 1988, when foreign and independent films are shown. The theatre was continuously run as a movie theatre, with only temporary closures from time to time, usually due to renovation or change of ownership. It was closed due to flooding from a burst water main in December 2014 and has remained closed due to a legal dispute with the theatre owners and an insurance company for a damages claim.

New owners took over in 2021 and plans are to refurbish and renovate, to re-open in 2022

I was fortunate to live in Ojai a truly magical place in 1987-8 helping to reopen the Ojai Valley Inn & CC…the Playhouse was a great refuge in a great little hideaway…caught The Living Daylights, Stakeout there amongst others in this little single aisled jewelbox…It is rumored that Roger Ebert has used it to preview films there from time to time

A vintage view of “The Ojay” as the Playhouse was also known in the Fifties, can be seen here on this postcard from my collection:
View link

ELEPHANT WALK is playing.
Ojay seems to be a lovely little Californian town. I wonder what the interior was like. Somehow so many theaters never show photos of their exteriors and interiors on their websites.

The Ojai Playhouse has just undergone an extensive renovation, thanks to owners Mark and Kathy Hartley and is now stunning! The sound system is top notch, as Mark is in the music industry.

The April 11, 1966, issue of Boxoffice said that San Francisco theater man Arthur Glasgow had bought the Ojai Theatre and would rename it the Glasgow Playhouse, operating it as an art house after refurbishing it.

Boxoffice said that the refurbishment was to be done by the F.F. Shearer Co., with architect Arthur Drilsman, though they must have meant B.F. Shearer Co. and architect J. Arthur Drielsma. Some issues of Boxoffice got more than their share of errors.

The Hartleys had an option to buy on the Ojai Theatre and chose not to. In 2010 the theater reverted to Khaled Ad-Awar and he returned the name of the theater to the Ojai Playhouse. In 2012, Mr. Al-Awar purchased a digital projector, an investment in the community that will ensure the screening of movies for many decades to come. E.DePuydt