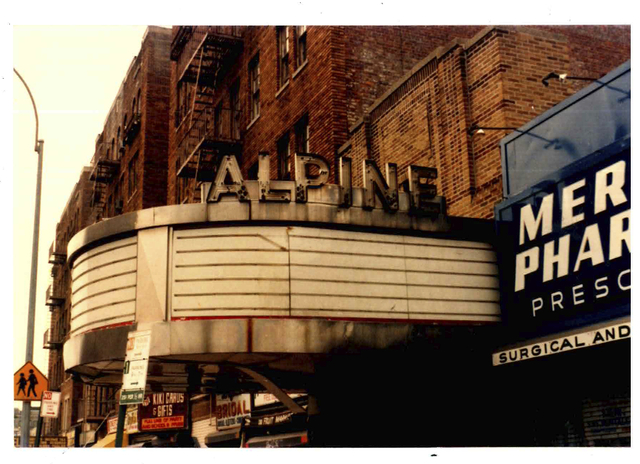 A few weeks ago, I was traveling south on Broadway in this vicinity and passed a building up on the northwest corner of 204th Street that looked like it might have been a theater at one time. That would be about 3 blocks north of this theater. Does anybody know if there was a theater around Broadway and 204th at any time?

I’ll never forget seeing the huge billboard ad, at the southeast corner of Dyckman Street and Broadway, for HERCULES starring Steve Reeves, just a stone’s throw west of the Alpine Theater. I lived further south in those days (1959), so my usual movie theaters were the Loews 175th, the RKO Coliseum, and the Empress, but in later years I sometimes went to the Alpine because a particular film was being screened there (e.g., THE SAND PEBBLES in 1966, or LAWRENCE OF ARABIA, which was the last film I saw at the Alpine, in 1971). It was one of the smaller theaters on the Heights, but that was an area with very few movie theaters after 1960 or so.

The Alpine Theater was on Dyckman and 200th Street; not 207th Street which had the Loew’s Dyckman or New Dyckman which was not on Dyckman Street but on West 207th Street.

I tried leaving a message but I don’t believe that it went thru..I am looking for anyone that may remember my mother, Nell and myself Phyllis. Also Andy,that worked at the Alpine..My son and I moved to 103 Thayer from louisiana to live with mother..I would love to hear from anyone..Thank u.

Why the name Alpine?