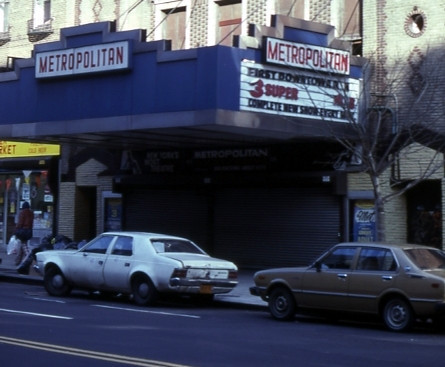 Opened in 1914 as the New 14th Street Theatre, operated by the SWS chain who also operated the Sunshine Theatre and American Movies Theatre. The Greater SWS Circuit as Charles Steiner’s group eventually came to be known, quickly came the largest exhibitor of motion pictures on the Lower East Side. Prolific architect Lorenz F.J. Welher’s design on the New 14th Street Theatre was one of his first for a full-fledged movie theatre rather than nickelodeons.

The theatre has since been razed and replaced by an apartment building.

Why was it so sleazy? I am intrigued

During the ‘70’s I was on a Local #306 Projectionist’s union team picketing a porno house around the corner from the Metropolitan. Our picket signs were stored in the Metropolitan booth. When our shift ended I volunteered with another member to take the picket signs back up to the booth. We got as far in the balcony as perhaps 30’ from the booth door when the stench got to me and I left the signs with my partner and headed for the exit. It was the only time in my life that I got that close to seeing a new booth and didn’t go in. “Sleazy” — I’d say!

The theater showed straight pornographic films but was very popular with gays and straight men looking for “down low” sex. The theater was crawling with sexual activity in the seats. in the dimly lit passageways on both sides of the theater that led to a large, dark space behind the screen where anonymous sex was always going on, and of course in the restrooms. It was sleaze personified.

does anyone know the last regular film to play this theater? I doubt it was playing a 3rd run neighborhood engagement of a big studio film one week than playing adult films the next week.

in terms of Al A.’s question. by “regular” film I mean a studio film having a 3rd run neighborhood engagement. or possibly a low budget American indie. also a foreign language film. in fact I should have just asked what was the last non-porn film to play the theater.

The question bigjoe is asking may not have an answer. Sexploitation films of the seventies often issued a soft core version for the drive-in trade. How would anyone know when The Met switched to hard core versions for good unless they were regular customers or worked there.

so I’m guessing that the theater went “adult” per se around the mid60s after being closed up even for a relatively short period of time. I say this because I can’t believe it was showing a 3rd run neighborhood engagement of a studio film that played say the Loew’s State or Criterion a few months before one week then
the next week was showing “adult” films.